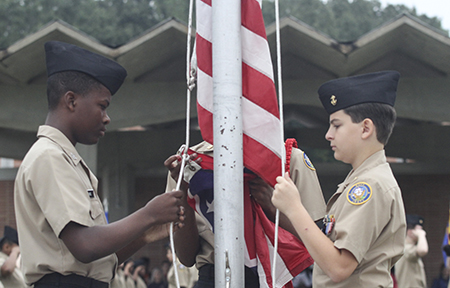 Sunday is one of those dates on the calendar where, for those who are old enough to remember, you know where you were.

You can recount almost the very steps you took to get to the nearest radio or television to hear news or see the video.

Sunday marks the 21st anniversary of the 9/11 attacks in New York, Washington and Pennsylvania, it also marked the very day the world — in many ways — changed.

When terrorists hijacked planes, crashing two of them into the World Trade Center Towers in New York and another into the Pentagon in Washington, the world changed. When passengers aboard United Airlines 93 — itself the target of terrorists — fought back against their captors, preventing the plane from being used as another weapon, the world again changed.

Today, there are those who were not born at the time of those horrific attacks who are among those serving in our Armed Forces fighting against the very forces that once planned the 9/11 attacks.

There are those who do not know where they were, or they remember the feelings of that horrific day, who are putting their lives on the line to make sure such a day never happens again.

In the Wednesday, Sept. 12, 2001, edition of The Vicksburg Post, staff took pen to paper — figuratively — to reflect on the feelings of the community, the country, and the world at that time.

“Americans do justifiably wonder what it is about this nation that would give rise to enmity of the level it took to plan and execute the atrocities. But to understand anarchy is to understand madness. Some things defy explanation,” The Post’s editorial said. “Many are saying change will come as a result of these, the worst-ever attacks on the American homeland. Some change, doubtless, will occur. But the very fact that we are a free and open nation — something that contributes to our vulnerability — must not change. If it does, then those who perished will have died in vain.”

In a fitting ending to the newspaper’s editorial on the day after the attacks, the editorial read “hate and small-mindedness cannot be allowed to prevail in this new millennium. This nation and its people must continue to value freedom, and to exhibit its power.”

In the two decades since those attacks, and since that editorial was penned, our nation has changed, and many of the emotions of unity have waned.

But what has not changed is the importance we must continue to place on the very freedoms our country was founded on; for it is that foundation of freedom and self-determination that has proved unshakable in the worst of days and worst of attacks.

GUEST COLUMN: For mental health, getting early help is critical

LOOKING BACK: The fiery past of the 1300 Block