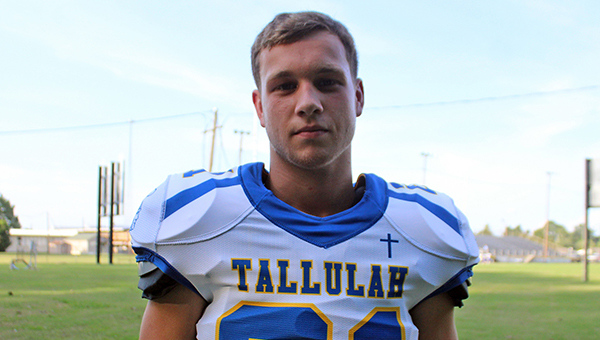 Tallulah Academy running back Brayson Morson rushed for 87 yards and scored three touchdowns in a 34-28 loss to Manchester Academy on Friday.

Tallulah Academy has had more success against Manchester Academy than any other team since the latter joined the MAIS’ 8-man football division in 2018.

Just not this time.

Manchester rushed for 203 yards as a team, built a 16-point lead by halftime, and then held off the Trojans 34-28 on Friday.

Manchester (4-0) improved its record to 52-4 since the start of the 2018 season. Three of its losses in that span came against Tallulah (3-1), and the Trojans almost pulled off a second-half comeback Friday night.

Brayson Morson scored two touchdowns, on a 12-yard reception and a 6-yard run, in the third quarter to bring Tallulah to within 34-28, but neither team scored in the fourth quarter and Manchester held on.

Morson also had a 60-yard touchdown run in the second quarter, and finished with a team-high 87 rushing yards on only seven carries. He had three total touchdowns as well as a sack on defense.

Tallulah quarterback Dee Morgan threw two touchdown passes — the one to Morson and a 4-yarder to Landry Tweedle — and was 5-of-11 passing for 122 yards. He also had 52 rushing yards. Tweedle caught two passes for 84 yards and the one touchdown.

Tallulah will play at Prentiss Christian on Sept. 16 at 7 p.m.