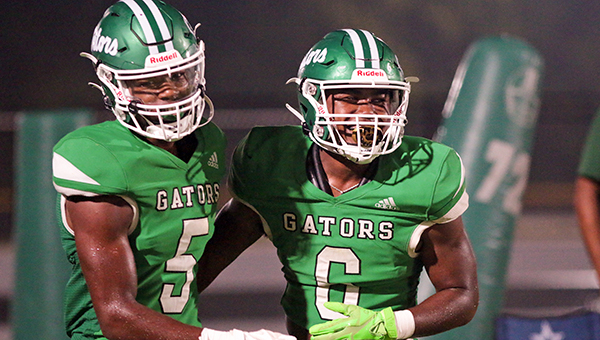 Vicksburg High's Johnny Smith Jr. (5) and Malik Montgomery (6) celebrate after Montgomery scored a touchdown in a 41-6 victory over Canton on Friday. (Walter Frazier/For The Vicksburg Post) 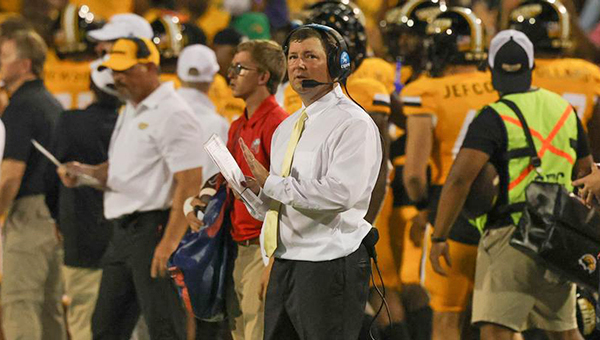 Southern Miss football head coach Will Hall watches his team during the season opener against Liberty on Sept. 3. Hall said he wears a shirt and tie while coaching as a tribute to some of his idols in the profession. (Joe Harper/BigGold Photinography/Southern Miss Athletics)

1
Some of the loudest cheers during Vicksburg High’s 41-6 win over Canton on Friday did not come after the Gators scored a touchdown. They came after the extra points.

Vicksburg kicker Bobby Taylor went 5-for-6 on PATs, and his one miss was blocked. Although most of them didn’t clear the crossbar by much, it was a welcome sight after kicking woes plagued the Gators in their first two games.

Vicksburg was 0-for-2 on PAT attempts against Germantown and Warren Central, and both misses influenced head coach Todd McDaniel’s decision-making in crucial late-game situations.

Instead of being in range for a short, game-tying field goal in a 10-6 loss to Germantown, the Gators had to go for a touchdown with a minute left and did not get it.

The following week, a missed PAT in the second quarter left the Gators needing a two-point conversion to tie after scoring a touchdown in the final minute. They didn’t get it, and lost 20-18 to the rival Vikings.

“Two or three points cost us the game (against Warren Central). If we hit three PATs with our touchdowns we probably win 21-20. But that’s over so let’s move on,” McDaniel said.

Taylor’s PATs didn’t factor into the outcome of the blowout win over Canton, but it still put a smile on McDaniel’s face afterward.

“He told me he wasn’t going to miss,” McDaniel said. “He said he wasn’t scared tonight and he put it between the uprights.”

2
For the second time in three games, Warren Central played deep into the evening.

The Vikings’ road game at Germantown on Friday was halted by lightning with 5 seconds left in the first quarter. It did not resume until about 9:35 p.m., after a delay of 1 hour and 45 minutes. The game finished around 11:30 p.m.

Warren Central’s season opener against Forest Hill also did not end until after 11 p.m. That game was the second half of the Red Carpet Bowl doubleheader and did not begin until 8:30 p.m.

The Vikings seemed to handle Friday’s late shift well. They got rushing touchdowns from Darius Carter and Eric Collins to build a 21-7 lead in the third quarter, and sealed a 28-13 victory with a 99-yard interception return touchdown by Treyvion Sanders with 50 seconds left in the game.

“I thought we came out of the lightning delay focused and re-energized and making some stops early and taking the momentum,” Warren Central coach Josh Morgan said. “We wanted to do that and made a play at the end to win it and I’m proud to see us pull off a hard fought win.”

Warren Central has an open date this week, and then will play its MHSAA Region 3-6A opener on Sept. 23 at Oak Grove.

3
Mississippi State will never be mistaken for a run-first, ball-control offense with Mike Leach as head coach, but the Bulldogs have run the ball more often — and more effectively — than usual early this season.

Mississippi State had 106 rushing yards in a 39-17 win over Arizona on Saturday, which followed a 97-yard effort in the opener against Memphis.

It’s only the second time since Leach became coach in 2020 that MSU has had at least 95 rushing yards in back-to-back games. The 106 yards against Arizona marked just the fifth time in 26 games under Leach that the Bulldogs have surpassed 100 yards.

Besides piling up yards, the Bulldogs used the run to effectively control the clock and the game. They had seven runs of 10 yards or more and possessed the ball fo 36 minutes and 40 seconds. They had it for 41:11 against Memphis.

Mississippi State has now won five consecutive games when its time of possession is 35 minutes or more.

The Bulldogs head to Baton Rouge next weekend to take on LSU. Kickoff is at 5 p.m. on Sept. 17, and the game will be televised on ESPN.

Golden Eagles coach Will Hall was dressed in his customary shirt and tie despite a 93-degree temperature for the noon kickoff at Hard Rock Stadium in Miami.

Asked about it in the postgame press conference, Hall said it was a tribute to his father — Mississippi high school coaching legend Bobby Hall — and others in the business that he grew up idolizing.

“I’ve got great respect for my dad and I’ve got great respect for a lot of pillars in the coaching industry that wore a tie,” Hall said. “I always said, if the good Lord blessed me to be in a position where I could be a head coach of a Division I school, I would wear a tie in honor of my father and all of the great men that built this profession up to this point. So that’s what I do and it’s out of respect for them.”