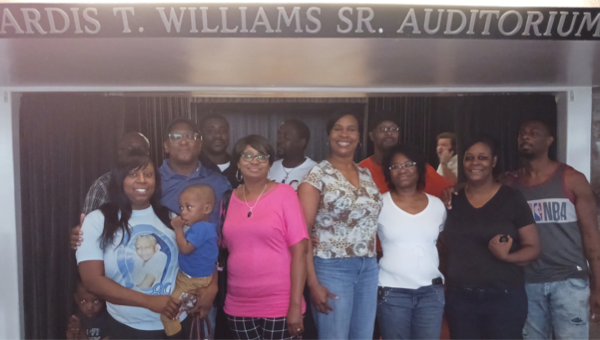 The family of Ardis Williams stands under the beam bearing the name of the Ardis T. Williams Sr. Auditorium. The auditorium was renamed for Williams, the longtime manager of the then-Vicksburg Auditorium, during a ceremony Friday. (Photo by John Surratt)

The Vicksburg Auditorium has a new name.

At a Friday afternoon ceremony, city officials renamed the building in memory of longtime manager Ardis T. Williams Sr., who died May 23.

“The Good Book says that ‘A good man is to be chosen rather than great victory,’” Mayor George Flaggs Jr. said during a brief program before the ceremony unveiling the auditorium’s new name. “Perhaps our friend knew of that because for Ardis, for all this time, kept his good name and his good work going in the same direction at the same time.

“It’s unbelievable to know that you’ve known a man that walked through here with so much passion and loyalty and dedication for not just this building, but his friends and all,” he said. “What a man; what a giant of a man.”

“You could be in a room and Ardis would just walk in and light up your day,”  Ward 2 Alderman Alex Monsour, who had been friends with Williams for almost 30 years said, adding Williams was at the auditorium when Monsour’s now 22-year-old daughter was in dance recitals there.

Addressing Williams’ family, Ward 1 Alderman Michael Mayfield said, “I duly appreciate you all sharing Ardis with us. It was truly an honor and a pleasure to call him a friend of mine.

“I loved so much about him,” he said. “I loved his attitude, his demeanor; I loved the way he carried himself. He was a fun-loving person and you don’t find people like that every day. Sometimes you have to stand back and watch people but you didn’t stand back and watch Ardis; he came to you and I really appreciated that in him.”

Mayfield called Williams a very hard worker, adding, “I still don’t see how he did what he did. No matter what you said to him, he said, ‘I’ve got to do it, I’ve got to do it.’ When you stop and think about a person like that and a person that has the heart the way Ardis did, you can’t help but love him; you really, truly, can’t.”

He said Williams meant a lot to the community, not just managing the auditorium, but to the community as a whole, and “I appreciated that in him and I know that no matter what you do because Ecclesiasticus tells us there’s a time for everything under heaven and you have to believe that.”

Williams, he said “did his time, he served well, he did things that made people happy. A great, great person.”