HE DID IT: Dale “Greybeard” Sanders reclaims Guinness World Record for oldest person to paddle down Mississippi River 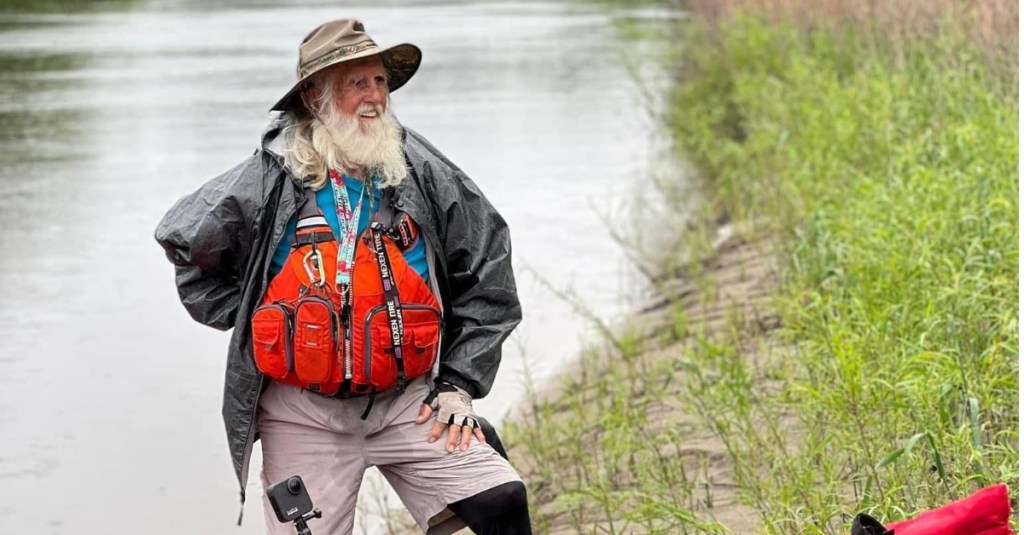 Dale “Greybeard” Sanders stands on the banks of the Mississippi River during a stop on his record-breaking canoe trip. (Photo by Dan Faust | Special to The Vicksburg Post)

When Dale “Greybeard” Sanders landed at the Vicksburg waterfront on Aug. 20, he may have been tired, hot and hungry, but that did not keep the 87-year-old from continuing his journey.

On Aug. 21 he put his canoe back in the water and on Sept. 8, he broke a Guinness World Record when he became the oldest person to paddle down the Mississippi River in just 87 days.

Sanders admitted his body was tired on the last day. “Ready to shut down,” he said.

But it didn’t deter him from the victory.

“We paddled out into the Gulf of Mexico enough to taste the salt in the water and then made the turn to come back into the beach,” he said.

Elated to see his wife, Sanders said he was also overjoyed to see his entire family there on the beach waiting to celebrate with him.

“My whole big family was there, every single one of them. Even my son, who lives in Ohio, everyone,” he said.

During his travels, which stretched 2,340 miles, Sanders had a film crew along for the ride documenting the historic feat.

“We followed Dale on his three-month paddle of the Mississippi River and filmed the incredible journey that will serve as the backdrop on which we tell the story of Dale Sanders,” Zak Rivers said.

Rivers, an award-winning photographer, filmmaker and musician from Minnesota, was directing the project, and he said, the last day of the journey started with a “beautifully colored sunrise.”

“But as we got going it was almost like the whole river experience down into one day. It was a beautiful morning as we got going, but then it started raining. It poured super hard, and the paddlers dealt with it where normally they would get a break. There was nowhere to stop on the last day — just weeds and water,” Rivers said.

Unable to stop and rest, Rivers said, the paddlers were exhausted by the time they made it to New Orleans.

“It was emotional for them, but when we got to the end, the rain cleared up and it was a beautiful afternoon and when we landed, we got the shots we wanted to get,” he said.

Rivers said the goal is to have the film ready for the Lookout Wild Film Festival, which is held in mid-January in Chattanooga, Tenn.

Titled “Greybeard: The Man, The Myth, The Mississippi,” the documentary will focus not only on Sanders’ journey down the Mississippi River but will also be an overview of his accomplishments.

Sanders said he was appreciative to all those who cheered him on and assisted on his journey.

“I want to thank the crew and the River Angels. All the hundreds of River Angels that helped us were just superb. It’s so important to have River Angels help you out along the way. I also had a crew that was experienced and that was a tremendous asset,” Sanders said, adding they all helped him reach his goal “as planned,” which was reaching the Gulf in 87 days.