LOOKING BACK: The Searles-Teller Home’s fascinating story on South Street 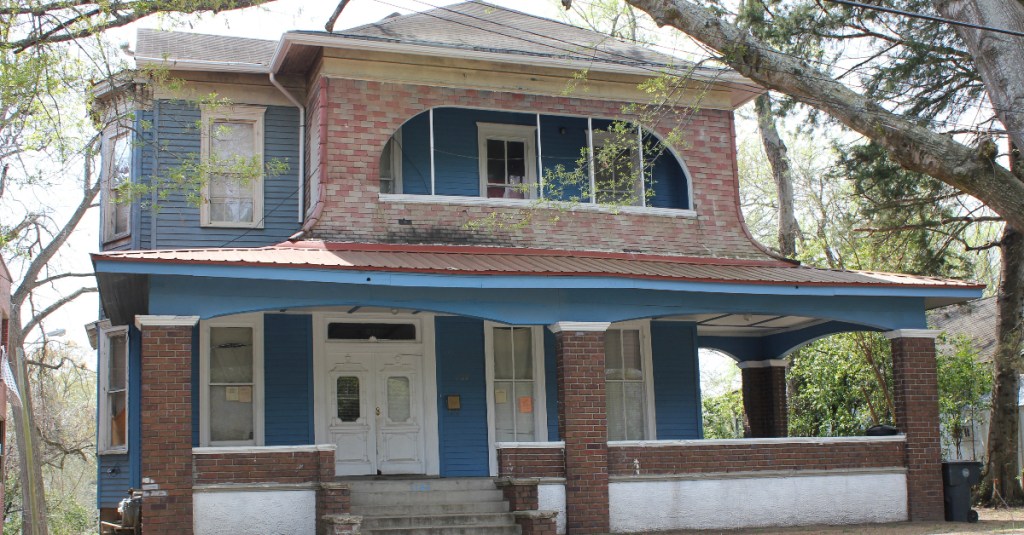 The Searles-Teller Home was constructed in 1907 at 1122 South St. and will soon be restored. (Photo Submitted)

This two-story frame house at 1122 South St. was built in 1907 on the south side of South Street by Thomas and Annie Searles.

On April 29, 1906, while the lot for the house was being graded and dirt added to bring the land up to street level, a “very peculiar accident” occurred, according to the Vicksburg American, resulting in the death of a mule. A team of mules was being used to haul in dirt and “the team in some inexplainable manner began to slip off of the embankment, and it was impossible for the driver to prevent the fatal result to the finest of the mules, which was a young animal and cost $125. Mr. Searles says that the team was owned by Mr. Cook and he had engaged him to have the grading done.”

It is somewhat prophetic that in 1913, the same kind of accident befell the Searles. The Vicksburg Evening Post reported that “Saturday afternoon the auto driven by T.M. Searles went down a 20-foot embankment in the military park near Virginia Circle. Mrs. Searles, Miss Annie Searles and Mrs. George W. Crock and the children were in the car. No one was thrown out of the machine, very fortunately, and only Miss Searles received a minor injury.”

When the Searles moved into the house in late 1907, it did not appear as it does today. It had a two-tiered, full-façade front porch. About 1912, the porch was changed to a one-story wrap-around one with a smaller second-story porch.  The three-sided bay window was also added on the east side.

Searles was the superintendent of agents for the Mutual Benefit Life Insurance Company and was involved in a number of community organizations. His wife, Annie, was a member of the Twentieth Century Club, the King’s Daughters and Sons, the Women’s Foreign Missionary Society and other groups.

They had four children: Mount, Marie, Annie and Emily. Mount graduated sixth in his class from the U.S. Naval Academy in 1913 and lived to be 96 years old, passing away in 1987. In 1914, the Searles family moved to St. Louis and the house was sold to Jacob and Florrie Landman Teller. Jacob owned the J.E. Teller Coffee Company on Washington Street where he roasted coffee and also sold tea and spices. An advertisement in the Vicksburg Evening Post in 1919 declared that “Our coffee is unexcelled in richness, purity, and goodness. We roast our coffee — others praise it.”

Both of the Tellers were involved in community associations. Jacob was a member of the Rotary Club and a founding member of the Mississippi-Louisiana Fair Association in 1919, the purpose of which was to “establish fairs for the exhibition of agricultural, mechanical and industrial products, as well as, horses, cattle, hogs, sheep, poultry, and livestock of every kind and description.”

Florrie was active in the Vicksburg branch of the Jewish Welfare Board and the National Woman’s Liberty Loan Association. The Tellers raised two children in the house, Landman and Emily, and Emily (Files) raised her two boys, Glenn and John, in the house as well, with John remaining in the house until the mid-1970s.

Thereafter, the house became rental property and today it has been purchased and will soon be completely rehabilitated and will once again become a single-family residence.

I asked Linda (Teller) Parker about her grandparents, Jacob (Jake) and Florrie, and she said that she remembered visiting the house and that it had a fig tree in the back yard and that Landman, as a young boy, had a pony that was kept there. She also told me a wonderful story about when she and her husband, Rod, moved back to Vicksburg and took a cruise on the Delta Queen. She said that the captain was an older man who had been called into duty because of the death in the scheduled captain’s family.

When she and Rod were up early having coffee, Rod struck up a conversation with the captain and told him that Linda was a Teller.  The man said, “the coffee man?” He remembered Jake bringing coffee down to the dock and that it was “the best coffee ever.”  Thank you, Linda.