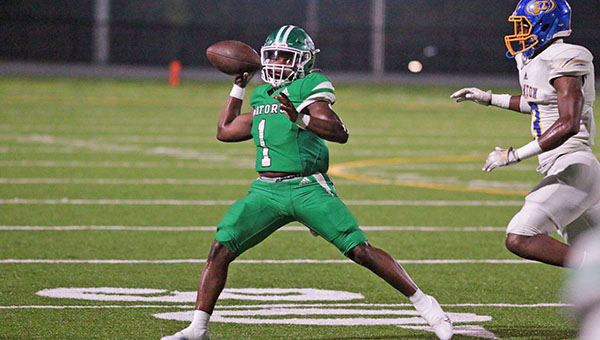 Vicksburg High’s Wing-T offense is perceived by many to be a plodding, run-first offense that produces three yards and a cloud of dust while chewing up the clock.

It’s got a dark secret, though, that the Gators are embracing.

Although Vicksburg has run the ball on 76 percent of its snaps this season, 43 percent of its yards and five of its nine offensive touchdowns have come on passing plays.

What’s more, four of those five touchdown passes covered 40 yards or more. The threat of throwing deep has given an exciting element to an offense designed to lull opponents to sleep.

The Gators’ long touchdown passes have been a mix of traditional deep balls and short throws that the receivers turned into massive gains.

Quarterback Ronnie Alexander threw two of his three touchdown passes in last week’s 41-6 win over Canton on deep routes down the seam. The other was a 5-yarder to Tyler Henderson.

Henderson also turned a short pass into an 80-yard TD in the season opener against Germantown.
Alexander, a junior, threw eight touchdowns in his first two seasons as the starting quarterback. He’s on pace to surpass that mark by the end of September. He’s completed 16 of 31 passes for 331 yards so far. His only interception came against Germantown.

“I believe we can run the football on anybody, but Ronnie is really coming into his own,” McDaniel said. “He’s thrown five touchdowns over the past three games. Hopefully we can continue to build on that and force people to leave the two safeties on the hash and make sure they play us honest.”

Just as important as producing big plays and points, the effective passing game is helping the run. When opponents have to respect the threat of a deep pass, it backs defenders off the line of scrimmage and gives the Gators’ backs more room to operate.

Vicksburg has rushed for 446 yards this season. Last week against Canton, excluding a 30-yard loss caused by a bad punt snap on the final play of the game, it averaged eight yards per carry.

“It opens up all the runs, because the defense spreads out,” Alexander said.

Vicksburg and Forest Hill will play Friday at 7:30 p.m., at Forest Hill High School in Jackson.

“I don’t care what their record is, we have to go over there and play to win,” McDaniel said. “We can’t come out flat, and we can’t turn the ball over and we can’t have these penalties.”

The Patriots lost 51-0 to Neshoba Central last week, but McDaniel said his team is not in a position to take anyone lightly. Despite the solid offensive production, penalties and other mental mistakes have plagued the Gators through their first three games.

Vicksburg has averaged 89 penalty yards per game. It had 14 penalties for 124 yards against Canton, although about 50 of those yards came with the backups in the game on the last two offensive series.

McDaniel said a lot of the penalties have stemmed from breaking in several new offensive linemen who are still struggling with things like holding and the snap count. Of the 35 penalties called against the Gators, five have been for holding and 10 have been false starts.

McDaniel was confident those mistakes will disappear with time and experience.

“I think we’ll be hard to beat if we can clean up our penalties. If we could have cleaned them up the first two games we could be 3-0, but we’re 1-2,” McDaniel said. “Until we clean those penalties up, people are going to have a chance to beat us — but when we do, we’re going to be hard to beat.”