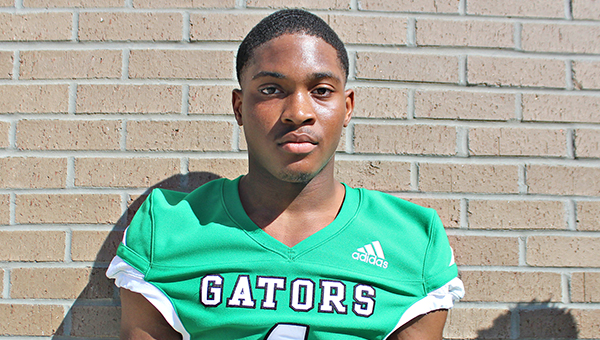 Vicksburg High running back Alex Jefferson had two touchdown runs in the Gators' 54-8 rout of Forest Hill on Friday.

The Vicksburg Gators chewed up Forest Hill on Friday night, even if it didn’t seem like much more than a snack.

Vicksburg led 20-0 at the end of the first quarter, and 46-0 by halftime. The entire second half was played with a running clock and only took about 30 minutes to complete.

“I was just happy to see them come out and execute,” Vicksburg coach Todd McDaniel said. “Ronnie threw the ball well, we blocked well up front, and the defense played extremely well. We didn’t punt until our JV guys went out there in the third quarter.”

Vicksburg (2-2, 2-0 MHSAA Region 4-5A) won its second game in a row after dropping the first two, and most importantly remained undefeated in region play. Up next is another road trip to Jackson, next Thursday to play Jim Hill.

“We’re 2-0 in district and we have the meat of our schedule ahead of us. I like where we’re sitting,” McDaniel said.

Tyler Henderson caught a touchdown pass for the Gators, and Mincer Minor and Malik Montgomery also scored touchdowns. Kearris Gilliam returned an interception 65 yards for a touchdown in the first quarter.

After totaling less than 400 yards and scoring just three offensive touchdowns in their first two games, the Gators have exploded for 95 points in back-to-back region wins over Canton and Forest Hill (0-4, 0-2).

“It’s always good crossing that goal line,” McDaniel said with a laugh. “I’m starting to see our passing game mature to go with our running game, and forcing people to be honest when they defend us. We got an opportunity to rest some guys tonight, too, which was good.”