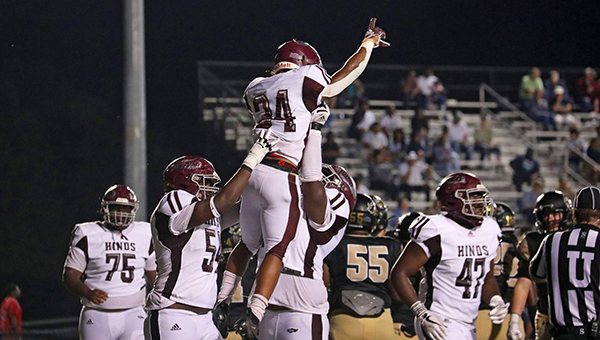 After two weeks of frustration, Hinds Community College finally left the stadium with something to celebrate Thursday night.

Zailon Johnson ran for 66 yards and three touchdowns, Jamarian Samuels had 183 rushing yards, and Hinds held off a fourth quarter comeback by East Central Community College to earn its first win of the season, 28-23.

Devontae Causey had two rushing touchdowns for East Central (0-3, 0-1 MACCC South), which scored twice in the fourth quarter to cut a 14-point deficit to five. Causey’s 1-yard TD with 6:51 remaining made it 28-23.

Hinds, however, finished the game with an 11-play drive that burned the last 6 minutes and 51 seconds off the clock. The Eagles (1-2, 1-0) converted two third downs along the way.

“Our running backs were able to make some big cuts for some big plays for us,” Hinds head coach Larry Williams said. “Us being able to run out the remaining seven minutes of the clock was huge. We still have some things to clean up, but I am really glad we got a win.”

Hinds will play at home on Thursday, Sept. 22 at 6:30 p.m. against Pearl River. East Central plays Jones College the same night at 7 p.m. in Ellisville.

Karson Green threw two touchdown passes to Shamar Sandgren and Watts scored on a 4-yard run as Itawamba erased a 21-0 deficit in the second half. Watts’ 8-yard TD run and Price Nixon’s PAT put the Indians ahead 28-21 in overtime.

Northeast Mississippi scored on a 25-yard pass from Carter Putt to Tyrell Randall, but the PAT was no good and Itawamba had its comeback win.

Sandgren finished with seven receptions for 93 yards and two TDs for Itawamba, and Green was 27-of-43 passing for 334 yards. Goldman Butler IV had 135 rushing yards and one TD on 32 carries for Northeast.

DeVon Tott had a 5-yard touchdown run and a 29-yard TD pass to Tyquan Henderson. He was 22-of-40 passing for 286 yards and had 84 rushing yards. He also threw three interceptions.

Lawson Pratt finished with 184 passing yards while throwing for one touchdown and running for another for Pearl River. His 34-yard TD pass to Christopher Holifield Jr. with 4:17 left in the second quarter gave the Wildcats a 14-7 lead.

Bracey scored on a 3-yard run with 5:16 left in the third quarter, however, and a 1-yard run early in the fourth to put Northwest ahead for good.

Cam Thomas added 93 yards and one touchdown rushing for Gulf Coast. McQuaide was 15-of-22 passing for 135 yards and the two TDs, and Odum finished with four receptions for 47 yards.
Jervin Smith also had six tackles and a 30-yard interception return for the Bulldogs.

Christopher Roberson threw a 15-yard pass to Ja’Coby Bellazar in the second quarter for Southwest Mississippi’s only touchdown.

Trenton Yowe had three tackles and a 65-yard interception return touchdown for Coahoma, and former Warren Central star Taylen Smith had one tackle for loss.