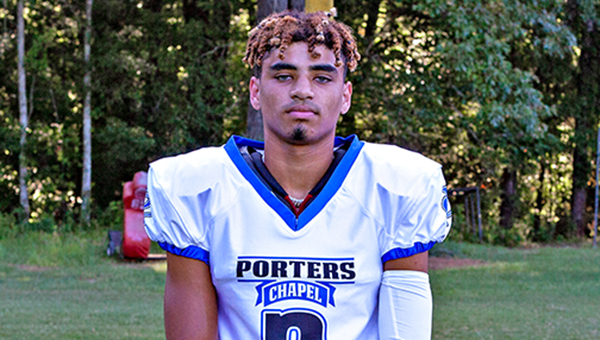 Porter's Chapel Academy running back Jase Jung carried the ball 16 times for 69 yards and a touchdown, caught two passes for 21 yards, and had an interception on defense in a 30-20 victory over Ben's Ford Christian School on Friday.

Down two scores in the first half, Porter’s Chapel Academy didn’t flinch and didn’t worry — and it didn’t lose, either.

PCA wiped out most of a 20-6 deficit with two touchdowns in the final two minutes of the first half, and then shut out Ben’s Ford for the last two quarters.

“That was huge to see,” PCA coach Blake Purvis said of his team’s fight through adversity. “We were in a dogfight early. It was a physical game. We kept our composure, we kept our heads, and we stuck to the plan — and it paid off.”

Ben’s Ford (3-2) raced out to its big lead as Jonah Holston scored on a 48-yard run and a 19-yard pass, and quarterback Ein Knight on a 1-yard run.

The Eagles then scored on the other side of the break, on Jase Jung’s 2-yard run with 7:03 left in the third quarter, to go ahead for good at 24-20.

Mack added a 3-yard touchdown run in the fourth quarter. PCA was 0-for-5 on two-point conversions.

“We held up well. The second half, what they did to us in the first half they couldn’t do,” Purvis said. “We won the line of scrimmage for the last 2 1/2 quarters and that was the difference.”

PCA finished with 183 rushing yards. In addition to Massey’s total, Jung had 69 yards and a touchdown on 16 carries, as well as an interception on defense. Mack only had 16 yards, but two touchdowns, and also caught six passes for 54 yards.

Massey was 10-of-14 passing for 107 yards, did not throw an interception, and ran the ball 10 times. Massey’s touchdown was from 24 yards out to Zach Ashley in the first quarter.

The win was PCA’s second in a row, and a key one against an opponent it will likely be jockeying with for playoff position as the season goes on.

“It was huge,” Purvis said of the win. “It was one we couldn’t slip on if we wanted to improve our stock for the playoffs.”