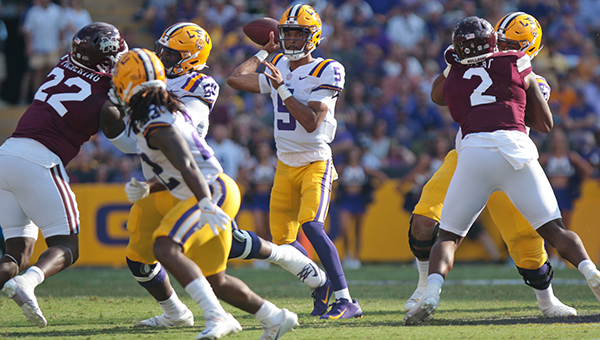 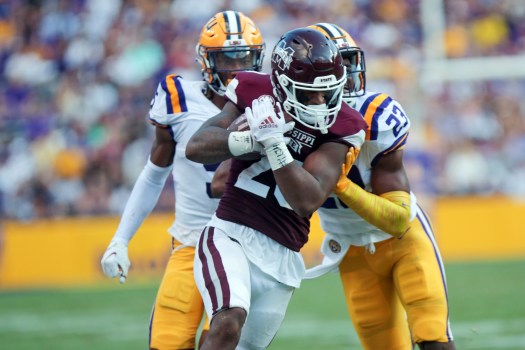 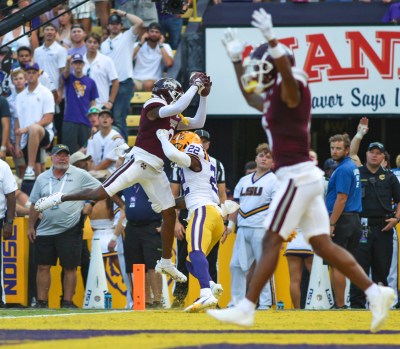 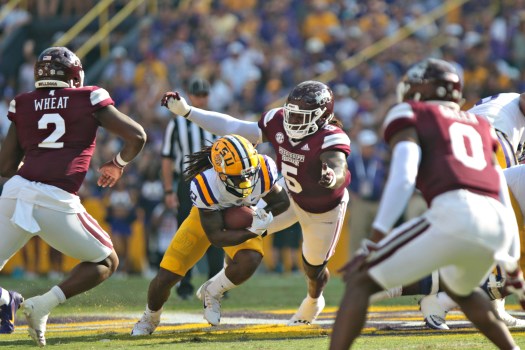 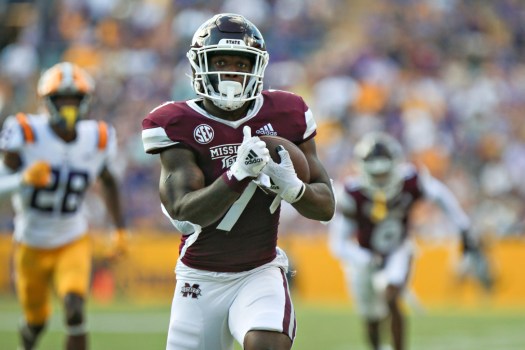 Mississippi State's Jo'quavious Marks (7) runs for a touchdown in the first quarter of Saturday's game against LSU. (Walter Frazier/For The Vicksburg Post) 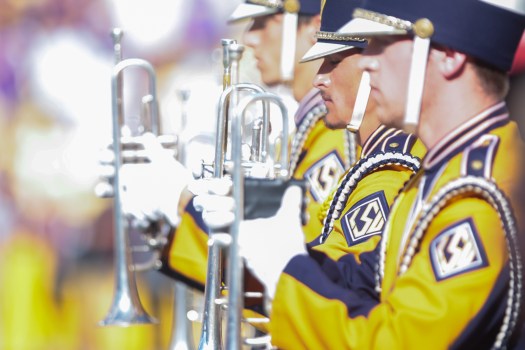 BATON ROUGE, La. (AP) — LSU quarterback Jayden Daniels emerged from the locker room with red, swollen bruises around his left eye — and a smile on his face.

His fearless scrambles frustrated and wore down Mississippi State while helping LSU open its Southeastern Conference slate on a triumphant note.

“I came over to the sideline and it was bleeding,” Daniels said with a chuckle when asked about his facial cuts and welts. “It is what it is — a battle scar. It’s going to swell up a little bit. But you know, it’s football.”

Daniels accounted for more than 300 yards of offense, including one touchdown passing and one rushing, and the Tigers wiped out a 13-point deficit en route to a 31-16 victory over Mississippi State on Saturday. Daniels completed 22 of 37 passes for 210 yards without an interception, and also rushed for 93 yards, mostly on scrambles.

“The one thing I know about this group for certain, and we are still trying to learn more about each other every day, is that they are fighters,” first-year LSU coach Brian Kelly said.

The Tigers finished it off with Armoni Goodwin’s 47-yard touchdown run with 4:50 left and Jay Ward’s interception of Bulldogs QB Will Rogers.

The Tigers didn’t take their first lead until early in the fourth quarter, when they cashed in on Austin Williams’ muffed punt on his own 10.

Daniels’ spinning, tackle-slipping scramble up the middle on third and goal from the 3 made it 17-16 on what was also LSU’s first third-down conversion of the game. The Tigers failed to convert on their first nine third-down tries, then made six of their last seven — and converted on fourth down on the one they missed.

The Tigers widened the margin with a 14-play, 85-yard touchdown drive that consumed six minutes. Daniels connected with Malik Nabers on three drive-sustaining passes — two on third down, followed by a surprise, 27-yard floater on fourth-and-3. Josh Williams powered in from 7 yards out on the next play to make it 24-16.

But the Tigers twice stopped MSU runs on fourth-and-short in the first half to keep the game close.

The Bulldogs could not get out of their own way. Three failures on fourth and short were compounded by the muffed punt, a holding call that wiped out an 88-yard kickoff return when MSU was just down by 8, a slew of dropped passes and Rogers’ fourth-quarter interception. He finished 24-of-42 for 214 yards and one touchdown.

“It is unfortunate because we are explosive; we are just inconsistent,” Leach said. “Explosive is fun and explosive means you can get on a run and hit a lot of dingers on somebody. But in the end, that will catch up to you if you are not consistent. We have got to coach consistency in them. That is what we have to do, starting with me.”

The Tigers’ defensive line is regarded as the team’s best position group and dominated the line of scrimmage. LSU sacked Rogers four times and made eight tackles behind the line of scrimmage. The Tigers hit Rogers many more times as he threw and the QB’s performance suffered during the second half, when he completed less than half of his throws (11-for-23).

“We came with a mindset that we were going to do our job as a defense,” LSU defensive end Ali Gaye said. “The mentality was to lock them down and bring the energy for (LSU’s) offense and let them do their job.”