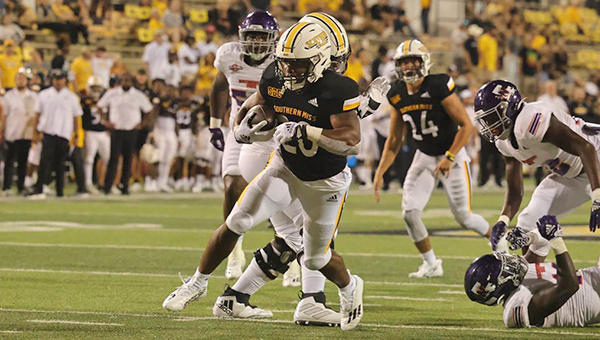 Southern Miss running back Kenyon Clay (20) runs into the end zone Saturday against Northwestern State. Clay was one of six offensive players to score a touchdown for Southern Miss in a 64-10 victory. (Photo by Joe Harper/BigGold Photinography/Southern Miss Athletics)

For one night, at least, the quarterback situation and scoring points were not a concern for Southern Miss.

It was the first time Southern Miss has scored more than 60 points since a 66-17 win over Charlotte in 2017.

Southern Miss (1-2) scored on six of its nine possessions in the first half. Briggs Bourgeois kicked two field goals in the first quarter, and then a 40-yard pass from Ty Keyes to Jakarius Caston started the touchdown train rolling.

Swayze Bozeman returned a fumble for a touchdown, Frank Gore scored on a 28-yard run, Caston caught another touchdown pass, and Jalen May hauled in an 89-yard TD pass from Keyes to put Southern Miss ahead 41-0 at halftime.

Keyes completed 6 of 9 passes for 192 yards and three touchdowns, and also had a rushing TD. Gore finished with 82 rushing yards and a TD, and Caston caught six passes for 94 yards and two TDs.

All four of Southern Miss’ quarterbacks saw playing time. Keyes, Zach Wilcke, Trey Lowe III and Jake Lange combined to go 18-of-30 for 400 yards, with four touchdowns and no interceptions. Wilcke, a true freshman who started last week against Miami, was 9-of-18 for 102 yards and one TD.

Alcorn State 30, McNeese State 19
Aaron Allen threw an 89-yard touchdown pass to Monterio Hunt to help Alcorn State jump out to a 21-3 lead at halftime, and the Braves held off a second-half charge by McNeese State to earn a road win Saturday night.

Allen was 15-of-27 passing for 189 yards, with nearly half of it coming on the touchdown to Hunt. That was Hunt’s only catch of the game.

The Braves (2-1) ran for 215 yards as a team, split fairl yevenly between Javonta Leatherwood (80 yards), Jarveon Howard (74 yards and one touchdown) and Niko Duffey (61 yards and one TD).

Noah Kiani kicked two field goals in the fourth quarter to help Alcorn maintain its lead after McNeese cut it to 24-17. He was also 3-for-3 on PATs.

Knox Kadum was 16-of-33 passing or 260 yards and one touchdown for McNeese (0-3). He threw two interceptions and lost a fumble.

Alcorn plays at home next Saturday, at 6 p.m. in its Southwestern Athletic Conference opener vs. Arkansas-Pine Bluff.

Shegog was 21-of-31 passing for 246 yards and a touchdown, and ran for a team-high 53 yards and a TD on 15 carries. His 3-yard TD run was mixed in with three of Herber’s field goals in the first half to push the Statesmen to an 18-0 lead.

Valley scored two touchdowns in the second half, on a 3-yard runby Caleb Johnson and a 4-yard pass from Jamari Jones to Sylvester Campbell, to pull within 25-17 with 9:01 left in the game. Herber’s fourth field goal, a 32-yarder with 5:10 remaining, sealed it for Delta State.

Jones was 17-of-25 passing for 182 yards and one touchdown for the Delta Devils. He also had 39 rushing yards. Johnson had 79 rushing yards on 17 carries. Former Port Gibson star Jacory Rankin caught seven passes for 73 yards.

Sanders finished 21-of-31 passing for 357 yards, with four touchdowns and no interceptions. He also ran for two touchdowns as Jackson State piled up 628 yards of offense.

Sanders connected with Dallas Daniels on a pair of touchdown passes as Jackson State (3-0, 2-0 SWAC) scored touchdowns on three of its first four possessions and led 21-17 at the break.

The Tigers opened the second half with a kickoff return for a touchdown, a field goal and two more touchdowns to stretch their lead to 45-17 late in the third quarter. Sanders’ 15-yard touchdown run capped the surge.

Sy’veon Wilkerson added more than 100 yards and two touchdowns rushing and two scoring runs for Jackson State, which beat Grambling at home for the first time since 1999.

Despite hanging in the game for the first half, Grambling (1-2, 0-1) finished with just 244 yards of total offense.

Berghammer threw both of his touchdown passes in the first half, and his 3-yard TD run with 10:25 left in the third quarter put Wisconsin-Oshkosh ahead 34-0.

Cae’Lon Paige and Melvendrick Johnson scored on short runs for Millsaps in the fourth quarter. Moise Tezzo caught nine passes for 123 yards for the Majors.

Lakin only had three carries for one yard, but scored on a pair of 1-yard runs in the first half as North Greenville surged to a 20-6 lead. North Greenville stayed in front in the second half by scoring on a fumble return and a kickoff return.

DeAnte’ Smith-Moore carried the ball 22 times for 86 yards and a touchdown for Mississippi College, and Cole Fagan had 72 yards and two touchdowns on only nine carries. The Choctaws had 288 rushing yards as a team.