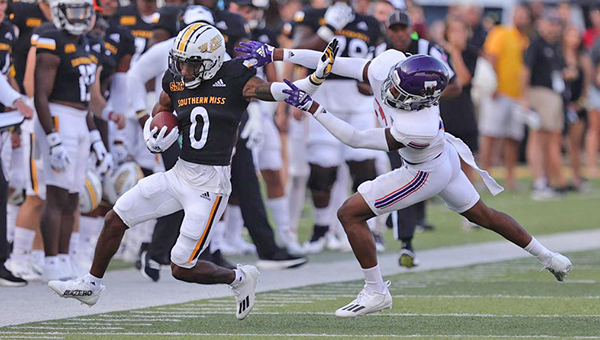 • Southern Miss wide receiver Demarcus Jones (Warren Central) had one rushing attempt for 5 yards in a 64-10 win over Northwestern State.

• Tulane linebacker Nick Anderson (Vicksburg High) had a team-high six total tackles, including one tackle for loss and one quarterback hurry, in a 17-10 upset of Kansas State.

• Grambling defensive back Myron Stewart (Port Gibson) assisted on one tackle in a 66-24 loss to Jackson State.

• Louisiana-Monroe defensive back Kevin Jones (Madison Parish) assisted on one tackle in a 63-7 loss to No. 2 Alabama.

• Reinhardt University defensive lineman Vertez Shorter (Warren Central) had three solo tackles and one tackle for loss in a 24-14 victory against Point University.

• Georgia State defensive back Jeremiah Johnson (South Delta) had one solo tackle in a 42-41 loss to Charlotte.

• Bluefield University defensive back Tyrese Wolfe (Vicksburg High) had one solo tackle and returned one kickoff for 12 yards in a 29-10 win over Union College.