VOLUNTEER OF THE WEEK: Jeremy Beasley volunteers for the next generation of athletes 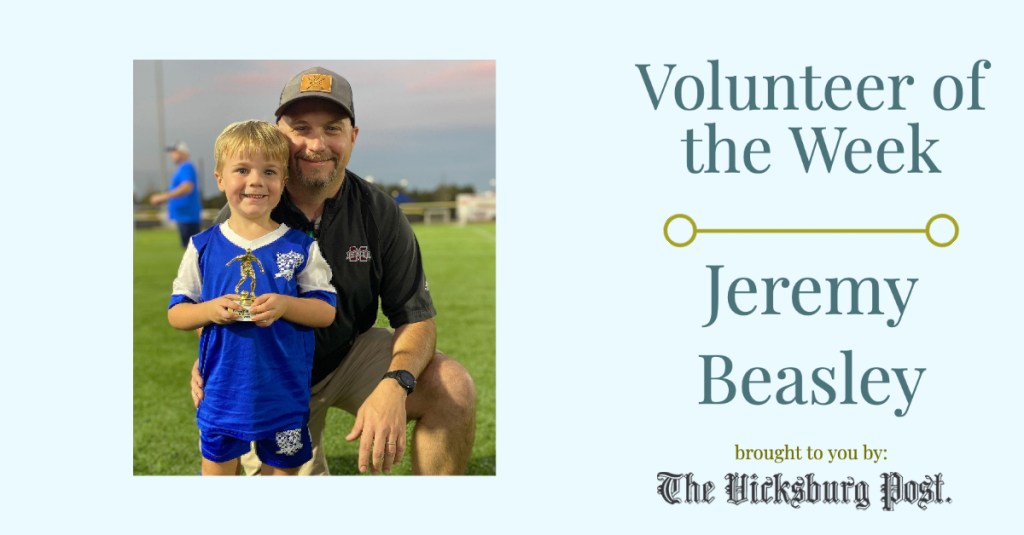 This week’s Vicksburg Post Volunteer of the Week is Jeremy Beasley, who volunteers as a soccer and t-ball coach. Beasley is a Geo-Information Specialist and the team leader for the Railroad Track Evaluation Program at the U.S. Army Engineer Research and Development Center (ERDC). Beasley is a lifelong resident of Vicksburg and a graduate of Vicksburg Catholic School and Mississippi State University. He and his wife, Christie, have two sons, Elliot, 5, and Clarke, 3. In his free time, Beasley enjoys various outdoor activities, live music, trivia and adventures with his family.

How did you hear about this opportunity?

One of my friends was coaching soccer for his daughter who attends the same school as my oldest son. I joined the team as an assistant and found it very rewarding. I followed up in the spring as an assistant for t-ball and decided that the next season I would sign up to be a head coach. The local sports organizations do a good job of advertising the soccer and baseball seasons and are always seeking volunteers.

How long have you been volunteering?

Ever since I was a junior at St. Aloysius, I have been involved in some form of service. As it relates to youth sports, I have been a soccer coach for two seasons and a manager for two t-ball seasons. I am currently coaching U5 and U6 soccer this fall and plan to coach t-ball and baseball in the spring.

What is your favorite memory while coaching?

In the 3- to 5-year-old range, there aren’t really specific plays that stand out. I can think of a team or a few players that shined, but my favorite memories relate to the building of the teams, seeing the progression of children throughout the season and their excitement of scoring a goal or getting a hit. From first-timers to experienced players, I want them to learn at least one thing that they can take with them as they grow and learn. It’s especially heartwarming to be out in town and hear “Hey coach” from one of my current or former players. I also enjoy the fact that all the noise and negativity disappears when players are inside the lines and working as a team toward a common goal. The support shown by these children to their fellow teammates has been amazing.

What would you tell someone who wants to volunteer?

I had not put much thought into being a coach for my child’s team and was apprehensive about the thought of doing it, even though I grew up playing recreational soccer and baseball in Vicksburg. By first signing up as an assistant, it allowed me to see how practices and games were scheduled and executed and eliminated a little bit of the unknown of what to expect as a first-time coach. If being an assistant is not an option and you will be a first-time head coach, there are numerous references via the local sports organizations and YouTube that can help you come up with ideas for practice. Other coaches will also work with you and can lead in games if you are unfamiliar with the sport. I am fortunate to have a job that allows me to volunteer and understand that not everyone’s schedule allows them to participate, but if you do have availability I encourage you to sign up. You are needed and you will get more out of it than you know.

What have you learned from volunteering as a coach?

Just like with any team, it takes trust and communication to be successful. As a coach/leader you have to direct and organize but more importantly, you need to observe and listen. Every player is motivated by different things and it can take effort with some of them to find what that motivation may be, but once you tap into it most seem to positively respond. Being a coach has also allowed me to reflect back on my years playing baseball at Culkin or soccer in the fields behind Warren Central Junior High School and the fond memories that were created and friends that were made. I think back to my coaches, specifically Glen Ward in baseball, and the skills he taught me and how I am trying to pass those skills to my players now.

My initial reaction when I was contacted as a (Volunteer of the Week) nominee was that I was not as qualified as previous volunteers and I am not the only parent coaching multiple sports, but I decided to participate for a few reasons. First, if someone thought I was worthy of nomination, I wanted to say thank you by participating. Second, I wanted to encourage those that may be on the fence about coaching to do it. Finally, I wanted to highlight the importance of organized sports and the benefits of being on a team.

If there is a volunteer who should be featured, please submit their name and contact information to volunteer@vicksburgpost.com.