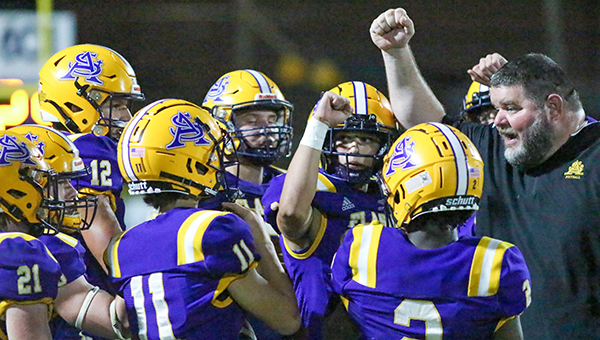 1
St. Aloysius has perhaps the the most difficult schedule in MAIS Class 5A. Five opponents reached the semifinals in their respective classifications in 2021, and only two — one of which played two games before canceling the rest — are below .500 at the halfway point of this season.

Along with a wave of injuries, it’s added up to a 1-4 start for the Flashes following Friday’s 37-8 loss to Adams County Christian School and the continuation of a curious trend.

Since joining the MAIS in 2015, St. Al has never entered October with a winning record and has only been at .500 once. It is 11-38 overall in games played in August and September.

St. Al’s remaining schedule continues to be difficult. It plays at Cathedral (2-3) this Friday, and then its last four opponents have a combined record of 18-2.

Cathedral, along with Park Place, are the only two teams on St. Al’s schedule that currently have losing records. Park Place canceled its season after Week 2 because it did not have enough players to compete.

The Flashes have had at least a half-dozen starters miss games because they were hurt, adding literal injury to insult.

After the loss to ACCS, it led coach Bubba Nettles to praise his team’s gritty effort in the face of growing adversity. The Flashes held ACCS scoreless until the midway point of the second quarter, before ACCS scored three touchdowns in the last 5 1/2 minutes to blow it open.

“There’s not enough words to describe the courage and the effort and the love for the game that those kids have. They are the reason I get up every day,” Nettles said. “They are fantastic and wonderful kids, and I want nothing for the best for them and it’s tough.”

2
With their lopsided wins on Saturday, Southern Miss and Jackson State achieved a rare feat for Mississippi’s four-year football colleges.

Southern Miss defeated Northwestern State 64-10 and Jackson State beat Grambling 66-24, marking the first time since 2015 and only the third time since 2000 that two of Mississippi’s 10 college football teams have scored 60 or more points in the same week.

Mississippi Valley State has gone the longest among Mississippi’s teams without reaching the 60-point mark. Its last time to do it was Oct. 3, 2009 vs. Texas College. Valley, Jackson State and Mississippi College have also achieved that milestone the fewest times since 2000, with two each.

Southern Miss and Alcorn State each have five 60-point games since 2000. Mississippi State and Ole Miss have four each, and Millsaps and Belhaven three each.

3
Mississippi State wide receiver Austin Williams did not catch a pass in Saturday’s 31-16 loss to LSU, but he did set a record.

Williams, a graduate student from Ocean Springs, played in his 53rd game to set a Mississippi State record. The previous record of 52 games was shared by eight players.

Williams has six receptions for 32 yards and two touchdowns this season. Despite setting the consecutive games record, he had another impressive streak broken against LSU. He was held without a catch for the first time in 24 games.

4
Sunday was a day for historic comebacks in the NFL.

The Miami Dolphins rallied from 21 points down to beat Baltimore 42-38, while the Arizona Cardinals overcame a 20-point deficit against the Las Vegas Raiders to win 29-23 in overtime.

It marked the first time in NFL history that multiple teams overcame 20-point halftime deficits to win on the same day.

Tua Tagovailoa threw six touchdown passes for Miami, including the game-winning 7-yarder to Jaylen Waddle with 14 seconds left. The Dolphins scored 28 points in the fourth quarter after trailing 35-14 entering the final period.

Out west, the Cardinals trailed the Raiders 20-0 at halftime and 23-7 with less than nine minutes left in the game. Kyler Murray led two touchdowns drives that included two-point conversions — one with no time remaining in regulation to tie it — and Byron Murphy scored on a 59-yard fumble return in overtime to win it.

Adding to the comeback theme in Week 2, the New York Jets scored two touchdowns in the last two minutes to beat the Cleveland Browns 31-30.

Joe Flacco threw a 66-yard touchdown pass to Corey Davis, the Jets recovered an onside kick, and then Flacco threw a 15-yard TD to Garrett Wilson with 22 seconds left. The PAT gave New York its first win of the season.

That was all after Nick Chubb scored a touchdown to give the Browns a 30-17 lead with 1:55 remaining, and rookie kicker Cade York missed the PAT.

According to ESPN Stats, teams had won 2,229 consecutive games when leading by at least 13 points in the final two minutes. The last team to blow that kind of lead was the Browns in the 2001 season against the Bears.

“This league is funny,” Browns quarterback Jacoby Brissett said. “This one was tough. It just shows you can’t take anything in this league for granted. Not even talking about the end of the game, a bunch of plays early on, miscues and things of that nature.”

The Associated Press contributed to this report