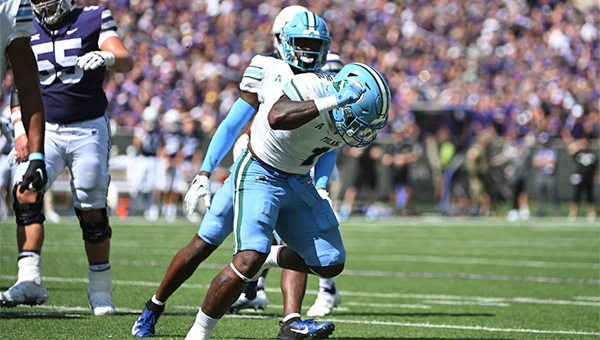 Tulane linebacker Nick Anderson, a former Vicksburg High star, celebrates after making a tackle during a 17-14 win over Kansas State on Saturday. Anderson had six tackles and was named the American Athletic Conference Defensive Player of the week. (Parker Waters/Tulane University Athletics)

A year ago, almost to the day, Nick Anderson broke his leg. This year, things went a whole lot better.

Anderson, a senior linebacker, led Tulane to a 17-10 upset of Kansas State on Saturday and on Monday was named the American Athletic Conference Defensive Player of the Week.

The former Vicksburg High star had a team-high six tackles, including a tackle for loss, and a quarterback hurry. Two of his tackles came on fourth down plays as Tulane held the Wildcats to 1-for-5 efficiency on fourth down and 2-for-15 on third down.

Anderson missed a large chunk of the 2021 season after breaking his leg in a Week 3 game at Ole Miss. It was one of a number of setbacks for he and the Green Wave as they struggled to a 2-10 record.

So far this season, Anderson has 11 tackles, including one for loss, and a blocked kick as Tulane is off to a 3-0 start. The Green Wave plays at home this Saturday, Sept. 24, against Southern Miss before opening their conference schedule Sept. 30 at Houston.

Anderson wasn’t the only Mississippi native to garner recognition from the American Athletic Conference on Monday. Oak Grove product John Rhys Plumlee was named the league’s Offensive Player of the Week after leading Central Florida to a 40-14 rout of Florida Atlantic.

Plumlee, who transferred to UCF from Ole Miss in the offseason, completed 25 of 39 passes for a career-high 339 yards and one touchdown. He also had 121 rushing yards and two TDs on 16 carries to account for 460 of the Knights’ 653 total yards.