Flashes fired up for rivalry game vs. Cathedral 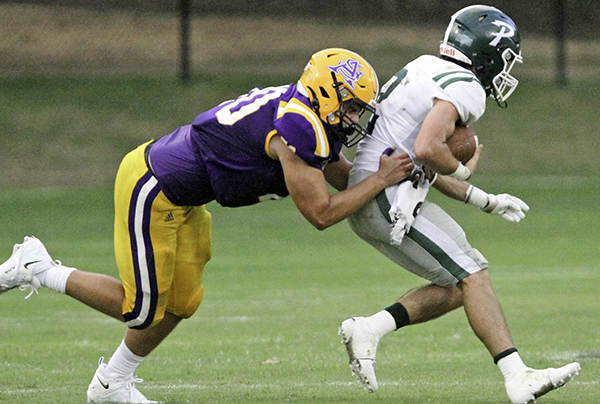 St. Aloysius' Land Oglesby, left, tackles a Park Place runner in the season opener in August. St. Al will go to Natchez on Friday to play Catholic school rival Cathedral in the latest edition of a series that started in 1938. (Paul Ingram/For The Vicksburg Post)

In the midst of a season that has skidded sideways, head coach Bubba Nettles is trying to use every trick in his bag to keep his St. Aloysius Flashes on track.

He found an easy one this week — a good, old-fashioned blood feud.

The Flashes head to Natchez on Friday to play archrival Cathedral at 7 p.m. It’s the 61st meeting between the two Catholic schools in a series that started in 1938 and over the years has been as much of a friendly reunion as a bitter rivalry.

“It’s always easy to coach in a rivalry week. The kids are amped up. They want to win. So we should have a very good, fun week of practice,” Nettles said. “All we’ve got to do is have our good week of practice, get on the bus, go down to Natchez and it should be a fun ballgame.”

Besides the fun and enthusiasm of coaching in a rivalry game, Nettles is fired up because he sees this as a good chance to end St. Al’s four-game losing streak.

The Flashes (1-4) have not won since beating Park Place in the season opener. Injuries have taken their toll — three starting linemen will be among those sitting out this Friday — and a brutal schedule that includes five teams that currently have one or zero losses has not helped.

Nettles, however, said Cathedral (2-3) is a more favorable matchup.

“They’re built a lot like us in the trenches. They’re small, but they’re very strong and athletic kids which is what we have,” Nettles said. “They’re very well-coached and will get after you, and have some good athletes on the edge at wide receiver. But for the first time in a while, we match up somewhat well in the trenches and I think that’s a big deal for us.”

St. Al’s offensive line has been hardest hit by the steady stream of injuries that sapped depth across the roster. Center Mason Watts hurt his knee in last week’s 37-8 loss to Adams County Christian School and will miss the Cathedral game, making him the third starter to go down since Week 1.

The replacements include two sophomores and a freshman who have a lot of upside but are physically outmatched against many opponents at this point in their development.

“What turned out to be our most experienced position in terms of a group quickly, over the past four or five weeks, has turned into a nightmare,” Nettles said. “We’ve had some young kids — Taylor Zadrozny at left tackle and Clark Hobson at right guard, and Fred Mixon at center — that have gone in and given us everything they’ve got. I have zero complaints. They’ve done a phenomenal job.”

St. Al enters this game in a similar position to last year. It started 0-5 in 2021, then beat Cathedral and Clinton Christian in back-to-back weeks. The wins weren’t enough to get the Flashes into the playoffs, but did provide a spark and something to play for down the stretch.

With a difficult schedule — St. Al’s opponents have a combined record of 34-11 through five weeks — being an asset in the MAIS power points system, a win this week could do the same this season.

“It gave validity to the work that our kids had been putting in, that they were able to get over that hump and get a victory. Up until that point we had several times where we had snatched defeat from the jaws of victory,” Nettles said of last year’s win over Cathedral. “This year it would be wonderful for us to go back down there and do it again.”