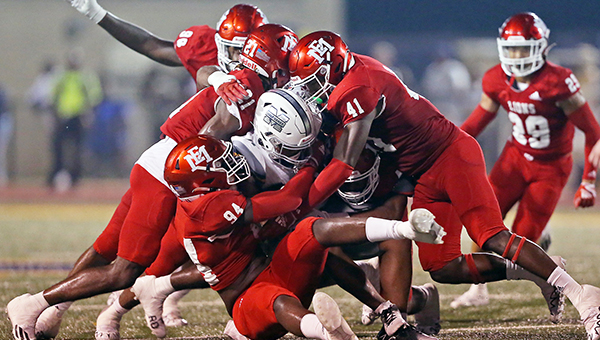 What was billed as the game of the week in the Mississippi Association of Community College Conferences started with a 99-yard touchdown run, ended with a huge comeback, and lived up to all of the hype.

No. 8 East Mississippi rallied from 24 points down in the second half, capped with a 10-yard touchdown pass from Eli Anderson to Duke Miller with 1:01 remaining, to beat Mississippi Gulf Coast 48-45 on Thursday night.

The teams combined for 1,150 yards of offense. Gulf Coast had a 200-yard receiver and two 100-yard rushers, and it turned out not to be enough as Anderson passed for 528 yards and four touchdowns.

“I’ve never been a part of a game like that,” Gulf Coast coach Jack Wright said. “If you’re a spectator, it’s a great game, but for us, it’s tough to be on the short end of that one.”

Cam Thomas had a 99-yard touchdown run on Gulf Coast’s second series of the game, and Keymauri Odom caught a 68-yard TD pss midway through the second quarter as Gulf Coast (1-3) built a 31-7 lead.

Odum finished with six catches for 201 yards and the two touchdowns. Thomas had 131 rushing yards and Xavier Evans had 102 and one touchdown.

Anderson hooked up with Stacy Robinson for a 75-yard touchdown with 7:35 left in the third quarter to ignite East Mississippi’s comeback. He also threw a 10-yard TD to Kobe Chambers and a 4-yarder to Marc Britt in the fourth, before hitting Miller for the game-winner with a minute to go.

East Mississippi (3-1) scored touchdowns on six of seven possessions starting with the long Anderson-to-Miller pass. Ethan Conner also had a pair of short scoring runs during the comeback.

“We had a chance to get some first downs late third quarter, early fourth quarter on offense and really take the pressure off our defense,” Wright said. “We just didn’t do it. We’ll have to go back and look and see where the fail-points were, but it feels like we ran out of gas.”

Former Vicksburg High standout Laurence Sullivan had one tackle for East Mississippi, and Levi Wyatt had two for Gulf Coast.

Hinds 14, Pearl River 0
Hinds Community College’s defense held No. 14 Pearl River to just 27 rushing yards and made a pair of first-half touchdowns stand up in beating the Wildcats on Thursday.

Hinds only had 55 passing yards, but ran for 233. Jamarian Samuels carried the ball 27 times for 200 yards, including a 3-yard touchdown in the first quarter. Quarterback Ruben Lee had the Eagles’ other touchdown on a 12-yard run with 6 seconds left in the second quarter.

Hinds won its second game in a row and will host No. 7 Jones College on Sept. 29 at 6:30 p.m. in Raymond. The game will be livestreamed through hindsccsports.net and broadcast on the radio on 94.3 FM.

Corey Case kicked field goals of 28, 30 and 40 yards to help Co-Lin build a 23-0 lead. Case’s 40-yarder with 48 seconds left in the third quarter was the first of four scores between the teams in a span of just over two minutes.

Tott threw a 60-yard TD pass to Bobby Shanklin on the first play of the fourth quarter, which followed a 64-yard TD pass from Cameron Davis to Ja’Coby Matthews for Southwest’s first score with 12 seconds to go in the third.

Jaylen Smith then returned a punt 62 yards for another Co-Lin touchdown to cap the wild exchange.Elijah Short had a 60-yard interception return for Co-Lin with 3:56 remaining to finish the scoring.

Putt was 11-of-26 passing for 127 yards, and ran for 21 yards. Tameron Patterson added 63 rushing yards and a touchdown for Northeast, and Juwon Gaston had a 79-yard punt return touchdown.

Mississippi Delta has scored a total of 17 points in four games.

East Central cut it to 17-14 on Corey Goldwire’s 1-yard TD reception early in the fourth quarter, but its last three possessions ended in two punts and an interception.

Three of East Central’s four losses have been by a total of 12 points.

Ren Hefley completed 23 of 34 passes for 268 yards, with three touchdowns and no interceptions for Northwest Mississippi (4-0, 1-0 MACCC North), and also ran for a touchdown.

E. Jai Mason caught five passes for 59 yards and two TDs for the Rangers, while D.T. Sheffield had four receptions for 87 yards and one TD. Former Warren Central star Tevin Bell had one solo tackle.