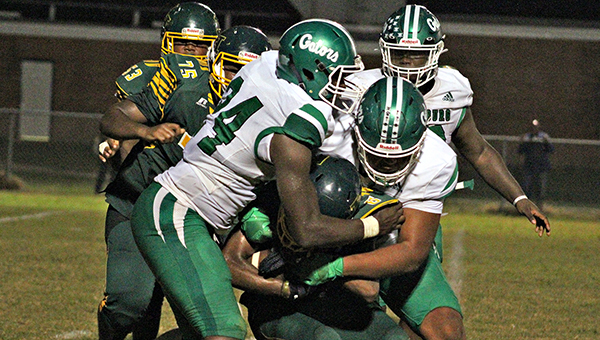 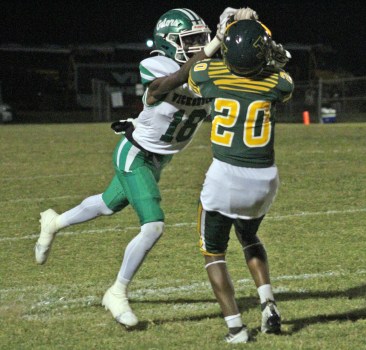 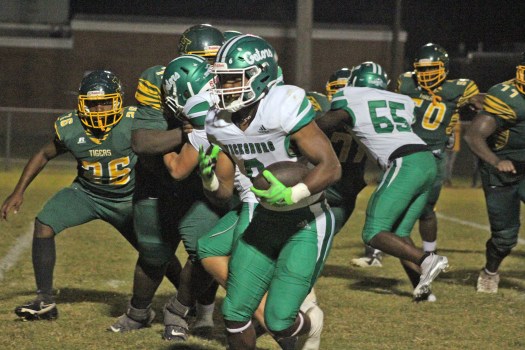 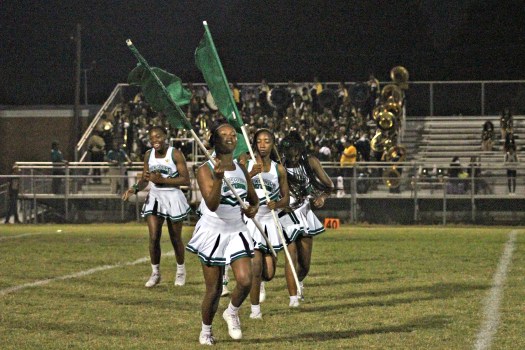 Vicksburg High's cheerleaders run across the field before the start of Thursday's game against Jim Hill in Jackson. (Ernest Bowker/The Vicksburg Post) 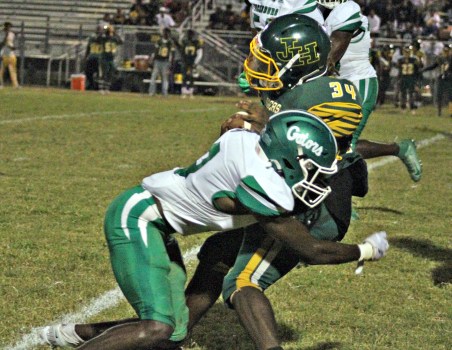 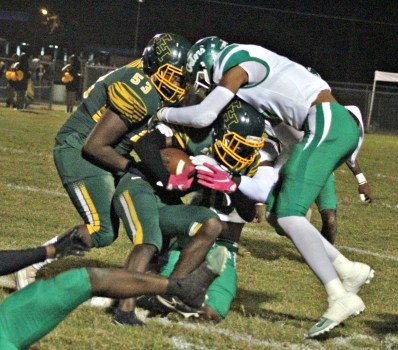 JACKSON — Jim Hill dominated the time of possession. Vicksburg High dominated everything else.

Vicksburg countered Jim Hill’s plodding ball control offense with a series of quick strike scoring drives and had no trouble in beating the Tigers 40-0 on Thursday night.

The longest of the Gators’ five touchdown drives lasted six plays, and three took only one or two plays. Safety Jaleel Fleming also returned an interception 107 yards for a touchdown in the second quarter.

Jim Hill had the ball for 32 of the game’s 48 minutes, but never penetrated deeper than the 15-yard line. It finished with 126 total yards.

“It was kind of weird. We’d get a big play and we’re off the field,” Vicksburg coach Todd McDaniel said. “I don’t care how we score, but I’d love to get in rhythm. Kudos to our kids and hitting it one-and-done, but we’re going to have to start putting together 14-, 15-play drives to really be where we want to be at.”

Malik Montgomery had a game-high 77 rushing yards and two touchdowns for Vicksburg (3-2, 3-0 MHSAA Region 2-5A). DeCorey Knight had 54 yards and one TD, while Collin Johnson added 63 yards as the Gators totaled 231 yards on the ground.

Despite the lopsided score, it took a while for the Gators to turn the game into the blowout it was expected to be. Jim Hill (0-4-1, 0-2) took the opening kickoff and gained three first downs while grinding seven minutes off the clock, then turned it over on downs near midfield.

Montgomery scored on an 18-yard run on Vicksburg’s first possession, but Jim Hill went back to work and kept the ball for the next 3 1/2 minutes. The Tigers got as far as the Vicksburg 25-yard line before quarterback Monterio Lilley was intercepted in the end zone by Fleming.

Fleming hesitated for a moment before bringing the ball out. Once he did, he picked up a few blocks, got to the right sideline, and went the distance for a 107-yard touchdown return and a 12-0 VHS lead.

It was Fleming’s third interception this season, and 13th of his high school career, but the first one he has scored on.

“I don’t usually score pick-sixes. I thought I was going to fall, but I just took it home. That’s my first time taking a pick-six back home,” Fleming said.

Vicksburg’s next offensive snap was also a touchdown — a 24-yard run by Knight with 7:43 left in the second quarter. In all, Vicksburg ran just seven offensive plays in the first 18 minutes of the game and took an 18-0 lead into halftime.

The Gators were stopped on downs on their opening possession of the second half, but quickly blew it open after that.

A 1-yard TD run by Montgomery and a 29-yard pass from Ronnie Alexander to Kedarrius Sims with 4:03 left in the third quarter capped a pair of two-play scoring drives. Two two-point conversions pushed the lead to 34-0.

The Gators’ final touchdown came with 3:03 left in the game, on a 22-yard pass from backup quarterback Michael Johnson to Tyler Henderson. Henderson finished with three receptions for 68 yards and the one TD.

McDaniel said he was happy to get a fairly easy win, especially with several starters sitting out with injuries, but admitted it was not his team’s best effort.

“It was not our best game. We had three offensive linemen out and three defensive guys out. But we still expect the killer instinct. We still expect them to go out here and play a little harder. No disrespect to Jim Hill, but on a scale of 1 to 10 we played a four tonight,” McDaniel said. “We’re about to get into the thick of our district and we have to bring our A-game. Tonight we started out with our C- or D-game and we can’t have that.”

The Gators will return home next Friday to play Provine for homecoming. Kickoff is at 7:30 p.m. on Sept. 30.