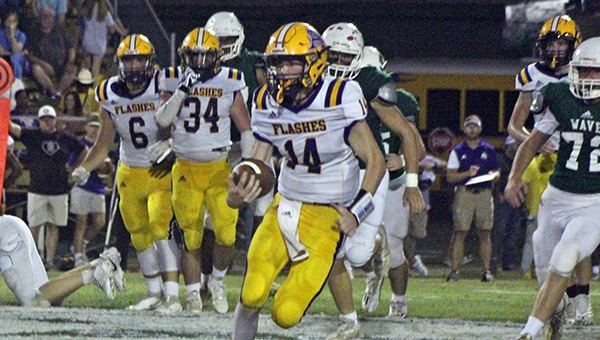 NATCHEZ — Cathedral came out of the locker room slinging, and used an early aerial barrage to bury St. Aloysius on Friday.

Cathedral quarterback Noah Russ threw four of his five touchdown passes in the first quarter, and the Green Wave rode the fast start to a 50-20 victory in the 61st meeting between the Catholic school rivals.

Kaden Batieste caught three touchdown passes, including a 68-yarder on the opening series.

Cathedral coach Chuck Darbonne opted to take the onside kick after that first touchdown. Justin Hawkins recovered and then scored on a 37 yard touchdown pass a few plays later to put Cathedral ahead 14-0 just 2 1/2 minutes into the game

“We wanted it after last year we took a hard loss (28-27), we took it back,” Hawkins said. “It was game over, all the momentum was on our side, it was time to take over. On the onside kick, I just saw the ball go up and it was all mine.”

“That was the devastating blow. It deflated us. To go down 14-0 that quick was hard to battle back from,” Nettles said.

St. Aloysius (1-5) did get back in the game, though. John David Liggett threw a 54-yard touchdown pass to Ahmad Stewart and a 47-yarder to Padre Gray to pull the Flashes to within 28-14 at halftime.

Gray also had a 50-yard touchdown run on the final play of the game and finished with nearly 200 all-purpose yards.

“The first touchdown made a difference at first and we built momentum off of one play. We came back and had a few mistakes, unfortunately it changed the game. It’s tough to recover from it,” Gray said.

Cathedral padded its lead with a 24-yard TD pass to Batieste with 8:27 left in the third quarter, and the Green Wave steadily pulled away from there. Its defense did not give up a point in the second half until the final play of the game.

Jake Maples scored a rushing touchdown for Cathedral, as did Paxton Johns. Tristan Fondren had an interception and Brycen Hughes had a 24 yard field goal.

“We stayed on them and made our impact on the game,” Darbonne said. “We had great protection for Noah too. We made plays on defense to force punts early on. I thought it was an improvement.”

St. Al’s lone touchdown in the second half was one for the highlight reel. Gray took a pitch and ran to the right sideline, reversed direction, juked several defenders, and cut it all the way back across the field to the left sideline before outrunning the rest of the defense. Time expired during the run, but Gray got into the end zone to make the final score 50-20.

“That last play was something I’ve always been taught to do. Last year I had a play like that. I got stuck on one side of the field and I did my best with what I had,” Gray said. “Only thing in my mind was to not fall. I have a bad luck streak. I wanted to finish through.”

St. Al will go on the road again next week to play Clinton Christian. Kickoff is at 7 p.m.