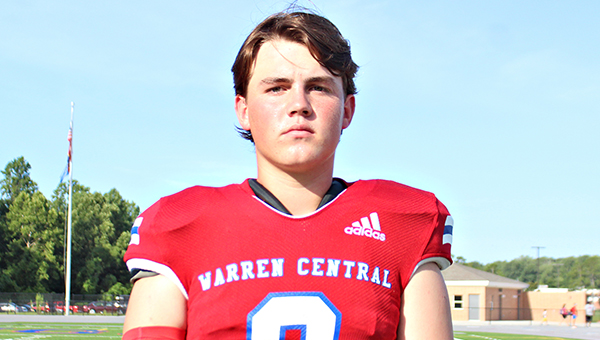 Warren Central wide receiver Maddox Lynch caught a touchdown in overtime and the game-winning two-point conversion in a 42-41 win against Oak Grove on Friday. Lynch finished with three receptions for 126 yards and one touchdown.

For the third game in a row, Warren Central needed to make a play at the goal line to squeeze out a victory.

When the defense couldn’t get it, the offense did.

Jack Wright threw a 10-yard touchdown pass to Maddox Lynch in overtime, and then the two hooked up again for a game-winning two-point conversion as Warren Central went on the road and beat Oak Grove 42-41 on Friday.

“We put ourselves in a bad situation, but we found a way to win. That’s what we do, and what we pride ourselves on as a program, is finding a way to win,” Warren Central coach Josh Morgan said. “It’s 1-0 in district and puts us in a really good spot. It’s a big district win on the road against a team that doesn’t lose many at home — or many games, period.”

It was a game of wild swings all the way through. Oak Grove (3-2, 0-1) jumped out to a 10-0 lead in the first quarter before Warren Central came back to tie it on a 12-yard touchdown run by Trey Hall and a 35-yard field goal by Jonah Artman.

Hall finished with two TD runs. Artman kicked two field goals and was 4-for-4 on PATs.

Late in the game, Warren Central seemed to be in firm control after scoring two defensive touchdowns in the fourth quarter. Zack Evans returned a fumble and Ronnie Blossom took an interception back 57 yards to put the Vikings ahead 34-24 with 3:56 left.

The fun was just beginning, though.

Oak Grove drove down the field for a 20-yard field goal by Luke Stewart, then recovered an onside kick with 2:05 to go. Anthony Maddox threw an 11-yard TD pass to Jaylen Aborom with 49 seconds left, and Stewart’s PAT tied it at 34.

In overtime, Maddox and Aborom hooked up again on Oak Grove’s second play. Maddox threw a jump ball to the right corner of the end zone and Aborom made an acrobatic catch for his third touchdown of the night, an 11-yarder that made it 41-34 after the PAT.

“It just makes everything more impressive with what we were able to do. They had all the momentum, and that was behind why we went for two,” Morgan said.

Warren Central’s defense had saved the day with late stops in previous wins against Vicksburg and Germantown, but this time it was the offense’s turn.

On the Vikings’ first play of their overtime possession, Lynch delayed his release off the line on a tight end slant and was wide open in the middle of the field. He caught the pass at the 5-yard line and ran in untouched for a 10-yard TD.

Lynch caught three passes for 126 yards in the game. In addition to his two clutch catches in overtime, he caught passes of 55 and 63 yards in the second half that both led to points.

After a timeout, Morgan elected to go for two and the win. The Vikings called a pass designed to go to Hall, but he slipped in the backfield. Wright didn’t panic, found Lynch wide open in the end zone, and tossed it to him for the game-winning conversion.

“Jack showed his wits staying with the play, and Maddox worked his way open. That was a really special play,” Morgan said. “A lot of times to win a game like that you’ve got to take some gambles. We felt like we had a play we liked. You could be a genius or you could be the biggest dummy ever, and it worked out.”