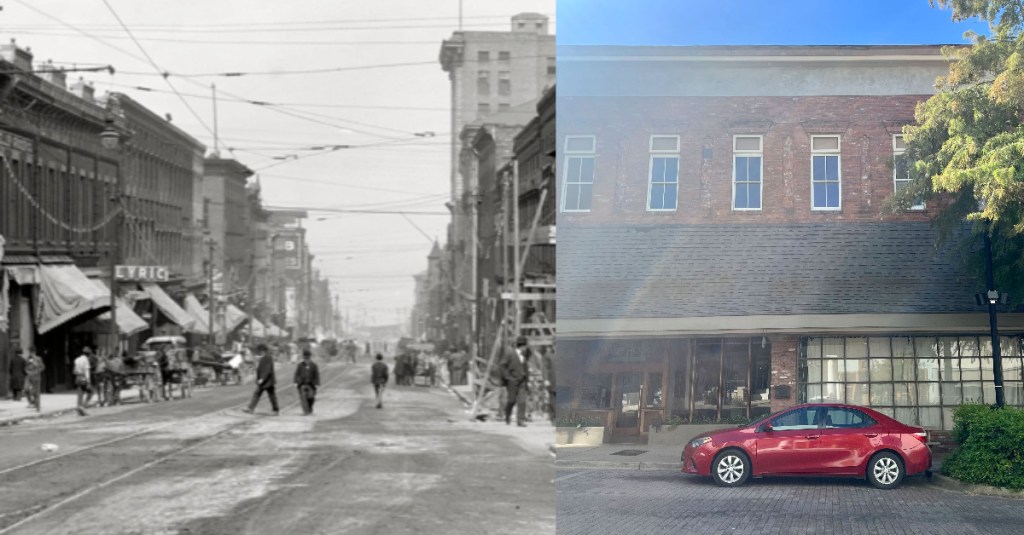 In about 1891, a large two-story building block with four storefronts was built on the west side of Washington Street between Crawford and South streets.

The two northernmost storefronts, 1412 and 1414, remain today.  One of the first businesses to occupy 1412 Washington St. was Tucker Furniture Store. In January 1894, Holmes and Rockwood Company Shoes moved into the building.

When they moved out in 1907, the Majestic Theatre moved in, managed by Mr. J.E. Moles. The theater offered “refined, high class, up-to-date vaudeville” and moving pictures. It was advertised as “fun, pleasure, amusement and vitality,” all for just 5 cents.

In February 1908, the fire chief was concerned about conditions in and about public places of amusement and decided, with the mayor and aldermen’s approval, to investigate their safety. Chief Wilkes found that the Majestic needed to remove its balcony, set seats wider apart and add another exit. The owners hired architect Michael Donovan to draw plans that would remedy these problems and by March the fire chief reported that the building was now safe.

In March 1908, Bernard and Tom Mulligan bought the Majestic and renamed it the Lyric. There were a number of other theaters in Vicksburg at the time, including the Idle Hour, Dreamland and Walnut Street Theatre. In order to draw customers, the Lyric offered contests, unusual exhibits and exhibitions and baseball game reenactments. For an increased admission (men, 50 cents; women, 25 cents; and children, 10 cents) you could listen to an announcer give the play-by-play of a baseball game that he received by wireless.

The Lyric held a “mush-eating contest,” which was participated in by four youngsters. The Vicksburg Post reported that “John Pichetto, aged 12, is the champion mush eater of Vicksburg and will be willing to hold the title against all comers. Young Pichetto outdistanced his competitors, eating a great big bowl of mush in a minute and a half. He had eaten the mush and licked the bowl before any one of his opponents had eaten half a bowl. The beaten ones declare that Pichetto fasted two days before the event, and was in prime condition when the contest opened.”

The Lyric also held several amateur nights with the winner determined by audience applause. The Aug. 21, 1908 winner was George Tickell who balanced heavy chairs and tables on the point of his chin and a straw and a paper cone on the tip of his nose. September’s events included Baldwin and Shea, who were acrobatic and eccentric dancers, and a “famous Sheath gown.”

The Vicksburg Post reported that “Miss Wilma Wood wears this famed costume with becoming grace and no doubt her figure was designed for the gown; at least this will be the verdict of every person in the audience. The gown is black, made with princess effect and is close fitting over the hips and the sheath or opening on the left side extended well above the knee, disclosing the silk stockings. No underskirts are worn with the sheath skirt, and there is the clinging effect to the gown which is one of its chief characteristics. Miss Woods, besides having a pretty face and beautiful form, sings in a very good way, but it cannot be forgotten that the gown is the center of attraction.”

Perhaps the most unusual and rather unsettling was an ad in The Post on Jan. 30, 1909, announcing that “A real, live baby will be given away at the Lyric Theatre tonight: also $15.”

The Feb. 1 paper reported that Marion Chamber had won a $10 gold piece, Harry Poarlman had won a $5 gold piece and Bordine (actually Birdine) McHugh was given the live baby. I guess that it could have been a live baby animal of some kind. Bernie Mulligan closed the Lyric on April 21, 1913, because of “over-competition and other conditions.”

Thereafter, the building was occupied by the Bijou Theatre from 1914 to 1922, the House of Fashion (1923), Kline’s Ladies Ready-to-Wear (1929), Kay’s Clothing (1935), The Style Shop, etc. The 1412 address is the right half of the building in the modern photo and is identified in the historic photograph by the “Lyric” sign in front.