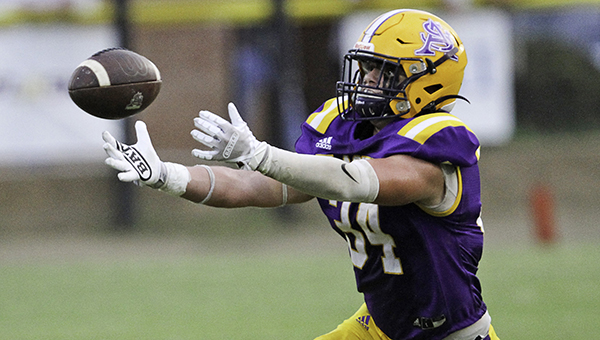 St. Aloysius running back Damien Reeves stretches for a pass earlier this season. The Flashes will go on the road Friday night to play Clinton Christian as they try to end a five-game losing streak. (Paul Ingram/For The Vicksburg Post)

For the St. Aloysius Flashes, a playoff berth is still mathematically possible but not likely. Same with a winning season. After five straight losses and a tsunami of injuries, just getting through the last few games in one piece might be the most realistic goal.

When he looks at his team, however, head coach Bubba Nettles beams with the same level of pride as if they were undefeated.

“These kids don’t back down. It’s the next man up mentality with this group. There’s not many teams out there that could suffer what we’ve gone through and continue to have high spirits and high hopes,” Nettles said. “They’re understanding that it is what it is and there’s nothing we can do about it, so we might as well keep playing football with the next man up.”

St. Al’s season went sideways early as injuries destroyed the team’s depth chart. Eight starters in the Week 1 lineup have missed at least one game. Five have been ruled out for this Friday’s road game at Clinton Christian (5-2, 0-2 MAIS District 3-4A).

Of the 29 available players on the roster, 18 are freshmen or sophomores.

“A lot of these kids didn’t have a lot of playing time in the first place because we had a big senior class last year that took a majority of the reps,” Nettles said. “In terms of experience, coming into the year, we didn’t have a whole lot. And the ones that did have since, for the most part, gone away.”

Experience for the younger players has come the hard way. Although they’ve had some competitive moments, four of the Flashes’ five losses have been by double digits. Often it’s been one mistake that snowballs into something much bigger.

Two weeks ago against Adams County Christian, it was a 16-point burst in a 45-second span that turned a scoreless game into a 37-8 rout.

Last week, Cathedral scored on the opening possession, recovered an onside kick and scored again, to take a 14-0 lead 2 1/2 minutes into the game. Cathedral added two more touchdowns later in the first quarter and went on to win 50-20.

Avoiding those kinds of sudden momentum shifts will be key to finding some success down the stretch.

“I call it getting in quicksand,” Nettles said. “It seems like everything you do after that, the more you struggle, the more you fight, the further and further off you go into it. As opposed to remaining calm, taking a deep breath and climbing your way out of it.”

The schedule doesn’t get any easier, either. St. Al’s next four opponents have a combined record of 20-4. Two of those losses came against Class 6A power Jackson Prep, and another came within the group.

Clinton Christian has already surpassed last year’s total of three wins, although four of its five victories have been against Class 3A teams and none of them have been against an opponent with a winning record.

The Warriors like to throw the ball, however, and Nettles noted that that has not been St. Al’s strong suit of late.

St. Al (1-5, 0-2) has given up 11 passing touchdowns in its last three games. Cathedral quarterback Noah Russ had five, including four in the first quarter.

“They will run if necessary, but they want to throw it all over the field. We have to get better with our pass coverage, because Cathedral last week really exploited a weakness for us,” Nettles said. “We’re going to get back to the basics this week of learning how to defend the pass. If we can do that, I think we’ll look up in the fourth quarter and find ourselves still in the ballgame.”