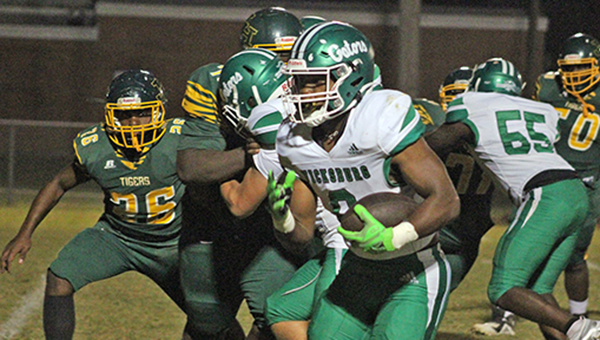 Vicksburg High running back Malik Montgomery breaks off an 18-yard touchdown run against Jim Hill. The Gators will go for their fourth straight win when they host Provine for homecoming on Friday at 7:30 p.m. (Ernest Bowker/The Vicksburg Post)

Even after three lopsided region wins, Vicksburg High football coach Todd McDaniel believes his team has not yet lived up to its full potential.

And that, he said, needs to change.

The Gators (3-2, 3-0 MHSAA Region 2-5A) play Provine (2-3, 0-3) for homecoming on Friday at 7:30 p.m. at Memorial Stadium. It marks the start of the transition to a more difficult part of the schedule where half-hearted efforts will no longer be good enough to skate by.

“We have not played a complete game this year. We have not put together a complete game in all three phases. It would be nice for us to start putting together complete games from this point forward,” McDaniel said. “We can’t afford to go out there and have an incomplete game on either side of the football, because these teams are going to be too good and you might not be able to recover from it.”

Vicksburg’s last four opponents all have winning records, whereas the first three region foes had a combined two victories. Provine marks the middle ground between the two.

Provine won its first two games, then dropped the next three in region play. It lost 22-14 to undefeated Callaway in overtime and hung tough with Neshoba Central before losing 38-20.

“They’re playing solid football. When you walk on the field with those guys you’ve got to respect those teams and really go out there and play football,” McDaniel said. “I just know we’ve got to be ready and have our A-game from this point forward.”

Following a 40-0 win over Jim Hill last week, McDaniel said the Gators had brought their “C- or D-game.” They were never seriously threatened against an overmatched opponent, but also didn’t fully pull away until the second half.

A half-dozen starters sat out because of injuries. Even so, McDaniel said, it was the kind of performance that made him take a hard look at all aspects of the operation.

A win this week would put the Gators in a strong position. Beating Provine would give them four region wins, when five or six will likely secure a playoff berth.

More important, McDaniel said, is keeping pace with the other frontrunners. The Region 2-5A race is shaping up to have five contenders for four postseason slots. One of them will wind up as the odd man out, and McDaniel doesn’t want it to be his team.

“We have to kick in that door. We have to understand that the fourth win is the most important win. We’ll worry about five when it’s time. But every win brings us one step closer to the playoffs and the district championship,” he said. “We can’t afford to lose one, simply because we’re in a race with other teams that are undefeated within the district. We’ve got to make sure we keep pace with them and don’t fall a game behind.”