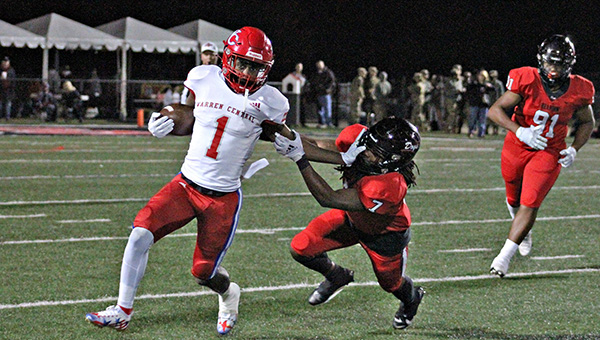 Warren Central's Trey Hall (1) stiff-arms Brandon's Anthony Griffith (7) during an MHSAA Class 6A playoff game in November 2021. No. 6 Warren Central and No. 1 Brandon play Friday at 7:30 p.m. at Viking Stadium, in a matchup of two of the last five unbeaten teams in Class 6A. (File/The Vicksburg Post)

Playing the top-ranked team in Mississippi won’t faze the Warren Central Vikings. There’s just too many other things to focus on this week.

Warren Central (4-0, 1-0 MHSAA Region 3-6A) takes on Brandon (4-0, 1-0) in a showdown of undefeated teams Friday at 7:30 p.m. at Viking Stadium. It’s a battle for first place in MHSAA Region 3-6A, a chance to avenge two bitter defeats from last season, and a game with huge playoff implications, all rolled into one.

Brandon is ranked No. 1 overall in this week’s Mississippi Associated Press statewide poll. Warren Central is No. 6.

“With those rankings we have no control over anything. We’ll use it. But it’s a district game, it’s our district champion from last year, it’s a team that put us out of the playoffs and it’s a top team in our district,” WC coach Josh Morgan said.

Brandon returned nearly every key player from a team that reached the Class 6A championship game in 2021, and was a preseason favorite to win it all this year. It has won three of its four games by at least 21 points.

The Bulldogs beat Warren Central in the regular season last year, as well as in the second round of the playoffs.

Their up-tempo offense gave the Vikings fits in both meetings, and handling it is crucial to their chances this time, Morgan said.

“They want to go tempo. That’s one of the ways they get you off-balance and take you out of your game plan,” Morgan said. “That’s a tough deal when they get going. The key to that is making stops and being able to handle it.”

When it comes to making defensive stops, Warren Central’s defense has had an unusual season. It gave up a touchdown in the final minute against Vicksburg, then stopped the two-point conversion to preserve a 20-18 win. The following week it was on the ropes against Germantown before an interception return TD with a minute left saved a 27-13 victory.

And then last week against Oak Grove the Vikings had perhaps their most split personality game yet. They had five takeaways and scored two defensive touchdowns, but gave up 500 total yards and seven pass plays longer than 20 yards, and surrendered 10 points in the last 2 1/2 minutes of regulation before winning 42-41 in overtime.

“We have to do a better job of executing. I was not pleased with our execution on Friday night. We have to do a better job of being consistently good in all three phases,” Morgan said. “We gave up seven big plays of over 20 yards. Of course Oak Grove had a lot to do with that. But that’s the team we’re trying to be. We have a lot that we have to get better at. It’s always good to win, but we’re still trying to improve. We need to improve.”

However they’re doing it, the Vikings are winning. They and Brandon are among the last five undefeated teams in Class 6A — Tupelo, Ocean Springs and Southaven are the others — and have a chance to take firm control of the Region 3-6A championship race.

Wins over Brandon and Oak Grove, the other two teams expected to contend for the title, would give Warren Central a two-game lead over both with the hardest part of its schedule in the rear view mirror.

“We can’t look at it like that. Nothing is given, especially in this district. You saw the run we made last year after starting 0-3,” Morgan said, referring to last year’s playoff run after the Vikings lost their first three region games. “You have to take it one game at a time, one week at a time. That’s all we’re doing right now. We’re fortunate to be in the position that we’re in, but things can change really quickly.”