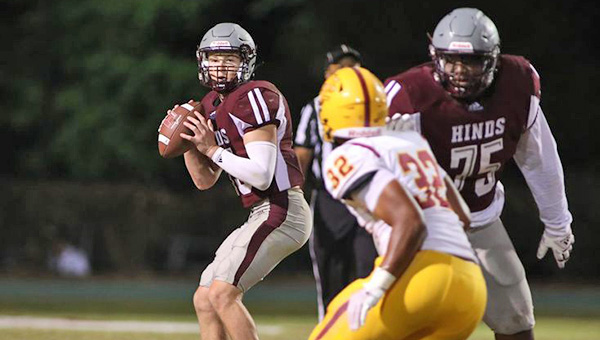 Hinds came all the way back from a 24-point deficit in the second half, but Robert Henry scored the go-ahead touchdown with 1:28 remaining to allow Jones College to escape with a 31-24 victory.

Henry’s other two touchdowns came in the first quarter, when Jones was building a 24-0 lead.

Hinds (2-3, 2-1) started its comeback with a 9-yard TD pass from Ranson Oakes to Kaleb Mosley with 5:25 left in the third quarter. A safety and two touchdown runs by Jeffrey Pittman in the fourth quarter tied it at 24.

Pittman finished with 126 rushing yards and the two TDs on 24 carries. Oakes completed 12 of 26 passes for 76 yards and one touchdown.

“We need to work on making sure we play our best out of the gate,” Hinds head coach Larry Willams said. “We played how we are supposed to play in the second half, but we need to make sure we don’t dig ourselves a hole early.”

Hinds will go on the road next week to play Southwest Mississippi College, at 6:30 p.m. on Oct. 6.

Davis finished 22-of-35 passing for 200 yards and two touchdowns as Southwest Mississippi overcame four turnovers and a 10-point deficit in the fourth quarter to win.

Davis threw four interceptions, one of which was returned for a 56-yard touchdown by former Warren Central star Jaylin Thompson. Thompson finished with two interceptions and six total tackles. His brother T.J. Thompson led the Warriors with 11 tackles.

Another former Viking, Brandon Gilliam, kicked field goals of 29 and 38 yards for East Central and was 2-for-2 on PATs. He also averaged 44.0 yards on four punts.

Four of East Central’s five losses have been by a total of 16 points.

Northwest scored 18 unanswered points in the second half. Betts had a 9-yard run late in the third quarter, and Bracey an 8-yard TD with 10 minutes left in the fourth. Eli Hamlin also kicked a 19-yard field goal.

Former Vicksburg High star Laurence Sullivan had a 58-yard interception return touchdown for East Mississippi (3-2, 1-1). Quarterback Eli Anderson was 19-for-26 passing for 173 yards, with one touchdown and two interceptions.

Nick Milsap ran for 80 yards and a touchdown for Pearl River (3-2, 1-1). Justin Jefferson had nine tackles, and Bryan Whitehead II had a 67-yard fumble return touchdown.

Quarterback Pat McQuaide threw two touchdown passes for Gulf Coast, which lost three fumbles. The Bulldogs also had a 10-play, 75-yard drive that ended on downs inside the 5-yard line thanks to Montgomery’s two big tackles.

Itawamba 55, Mississippi Delta 21
Red Parker completed 12 of 24 passes for 275 yards and three touchdowns — two to Azaria Smith, who had six receptions for 153 yards — and Itawamba Community College (2-3, 2-1 MACCC North) had no trouble with Mississippi Delta.

Eric Watts ran for 168 yards and a touchdown for Itawamba, and Jamal Brooks had 40 yards and two TDs.
Reeheem Fairley caught two touchdown passes for Mississippi Delta 0-5, 0-3), which had scored 17 points total in its first four games.

Co-Lin forced five turnovers, including a 68-yard interception return by Nate White for its final touchdown with 5:11 left in the third quarter. The Wolves fell behind 10-0 late in the first half, then scored five touchdowns in 10 minutes of game time spanning the second and third quarters.

Johnson’s 17-yard TD pass to Kerrick Ross with 6:59 left put Holmes ahead 34-24 and finally in control of the back-and-forth game.

Goldman Butler VI scored three rushing touchdowns for Northeast Mississippi, while Carter Putt was 37-of-54 passing for 379 yards and one touchdown. A.J. Davis IV caught 10 passes for 106 yards, and also scored on a 90-yard punt return.