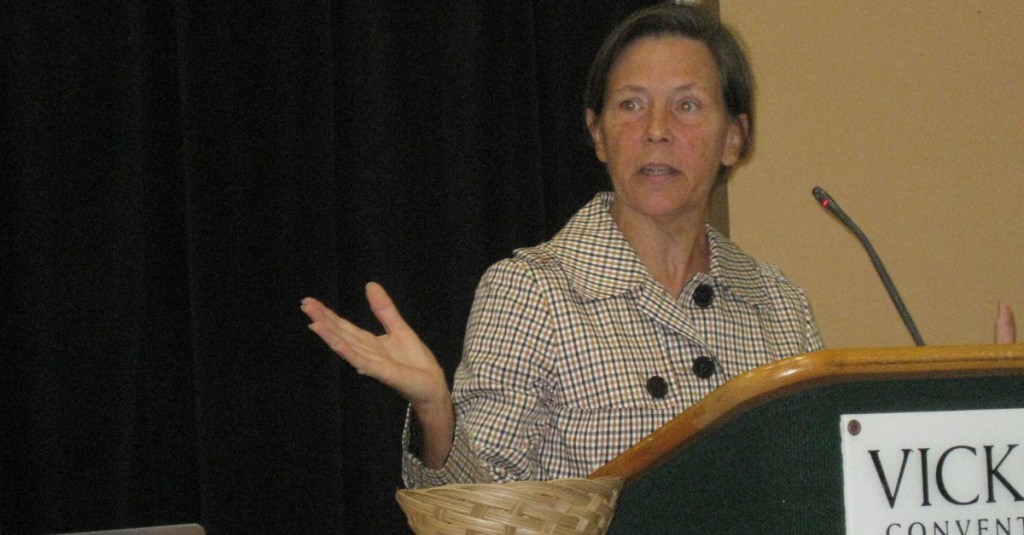 Warren County Board of Supervisors President Kelle Barfield discusses community growth during an address to the Vicksburg-Warren Chamber of Commerce. (Photo by John Surratt | The Vicksburg Post)

The Vicksburg Warren Chamber of Commerce welcomed a speaker who wears many hats at its monthly luncheon, held at the Vicksburg Convention Center Thursday.

“It is very hard for me to compartmentalize my passion for Warren County in just one of the roles that I play,” Barfield said. “So today, I am going to touch on several different areas and as I do that, I want you to think about opportunities in all these areas. And if you think of an opportunity, what kind of changes are necessary to make those opportunities a reality?

“What we know as a community, is that if you aren’t growing, you are dying,” Barfield added. “What we want is growth.”

Starting with education, Barfield said the Vicksburg Warren School District had a “huge, huge, week” with the announcement that the school district received a grade of “B” from the Mississippi Department of Education — a leap of two letter grades from the district’s previous grade of “D.” One improvement, she said, was the district’s graduation rate of 88 percent.

“It wasn’t just a few years ago, it was 65 (percent); that’s huge,” she said. “Our young people are staying in school and getting their high school diplomas in four years.”

“This transformation, what we were experiencing and celebrating, has been a long time coming,” she said, pointing out that it was 10 years ago when the chamber learned about the Leader in Me Program, which brought together the leaders in the business community and educators, who partnered to teach students how to unleash the leader within themselves in order to reach their full potential.

Listing the success of the program in the school district, Barfield said the district now has an academy model for its high schools.

“That’s part of why they stay in school,” she said. “Now, ninth-graders consider an exit strategy when they come into school and they say, ‘In four years, I’m either going to be enrolled in college, enlist in the military, be employed in a trade that I’ve been certified for, or an entrepreneur working for myself.’ So they have an exit strategy and understand why they need to stay in school.”

Barfield said Warren County is the highest in the state for students in dual credit hours, saying last year the district’s high school students earned 7,000 hours of college credit because of the district’s relationship with Hinds Community College.

“That saved families in this community some $6 million in tuition because those 7,000 hours were tuition-free,” she said. “Three hundred of our students got their associate’s degree at the same time they got their high school diploma.”

She encouraged members to learn more about the school district and its programs and tour the schools.

“Know the story, be passionate about what’s going on in our education system but more so, get involved if you’re not already involved,” she said. “We want people to live here, to be able to work here; you all have businesses, you all want a solid, educated workforce and even more so, we want people who work here to live here.”

Turning to the county’s economy, Barfield said the county’s tax rate of 117.77 mills has been the same for the past three years that the present board has been in office.

“We work very hard to keep your millage stable,” she said. “If you want lower taxes, you can spend less money or you can broaden your tax base — you can bring in more money.”

Barfield said the supervisors have taken several steps to save the county money — one being the use of grants.

“Just in the last 2-and-a-half years, under the current board through projects with the federal highway administration, FEMA (Federal Emergency Management Agency) and the Natural Resource Conservation Service we have approved road improvements, road and bridge improvements totaling almost $13.7 million — a lot of important road work had to be done. Of that, our county expenditures were less than $3 million,” she said. “So we were able to capitalize on available grant funds for roads and bridges.”

Barfield said the supervisors were able to get $750,000 in a combination of a grant from the Mississippi Department of Archives and History and state funds for the repair of the west wall on the Old Court House Museum grounds. The project is estimated at $2.2 million.

“We are now looking at ARPA (American Recovery Plan Act) funds to make up the balance,” she said.

Barfield also said the county’s fire protection is provided by volunteer firefighters which do not cost the county.

Barfield said the way to increase the county’s tax base is “support your local businesses. The chamber has done a marvelous job of bringing in members, ribbon cuttings. … You get those announcements; come support these businesses.”

“You can shop local, support these local businesses and spread the word about the services that are available in Warren County,” she said, and that support should include attending and supporting local events.

And people should get more involved in the community.

Barfield mentioned the Second Saturday event which occurs monthly downtown, and the need for locals to support this program and other events by showing up.

“The vendors say when we try to attract them, ‘It’s the chicken and the egg,'” she said. “We want to come, but only if there is a critical mass. So then the people only want to come if there are a lot of vendors. You guys are the ones who can make that positive momentum.”

Barfield mentioned The Vicksburg Post’s calendar, which can be found at www.vicksburgpost.com/calendar, as a way for the community to keep up with events that are being held and find ones to attend, and the need for residents to “enlist” in groups or organizations that will help them get more involved. Barfield said there would be a meeting next month with the goal of finding a way to connect locals and newcomers in the community with organizations they may be interested in joining.

“Work together,” she said as she closed. “You know change takes time, it takes our talent, it takes our treasure, our investment. The good physician Luke reminds us in the 12th chapter, however, that to those whom much is given, much is expected, much is required. That’s the only way we are going to change for the better.

“What starts here changes the world. And I truly believe it,” she added. “I really believe Warren County is on the cusp of fabulous, fabulous things that have been years in the making. I appreciate every one of you wanting to be a part of that positive change.”