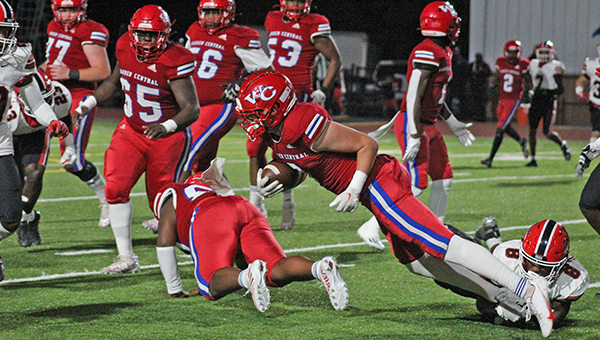 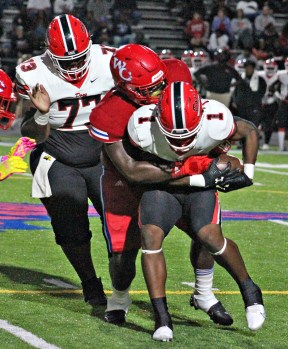 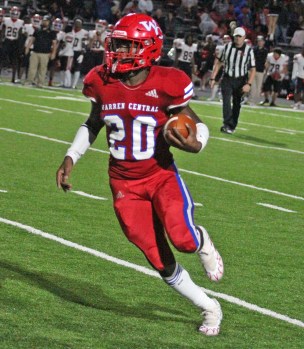 Warren Central running back Eric Collins (20) carries the football Friday against Brandon. Collins had 10 carries for 50 yards in the Vikings' 21-3 loss to the top-ranked Bulldogs. (Ernest Bowker/The Vicksburg Post) 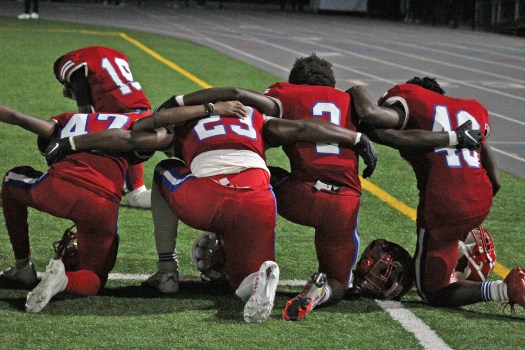 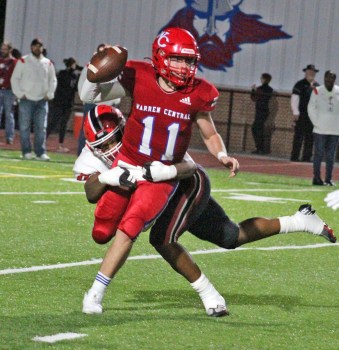 Warren Central did a good job of slowing down Brandon’s fast-paced, high-scoring offense.

It just couldn’t stop the Bulldogs when it mattered the most.

No. 1 Brandon scored two touchdowns on fourth down plays in the second quarter, sprinted down the field for another in the final minute of the first half, and beat No. 6 Warren Central 21-3 on Friday in a matchup of top 10 teams.

“The frustrating part is this is a big game for us and we didn’t play at our best. We have to fix that,” Warren Central coach Josh Morgan said. “You don’t get moments like this very often and usually the bigger the game the bigger the players play. We’ve got to push that. But we did some good things. I’m just frustrated because I know we can play better.”

Warren Central (4-1, 1-1) held Brandon to its lowest point total of the season — and shut the Bulldogs out in the second half — but a string of big plays in the second quarter turned out to be the difference.

Varnes and Miller hooked up for a 51-yard pass completion on a third-and-26 play to get the ball to the 5-yard line. The Vikings had a chance for a goal line stand, but Nate Blount scored on a 2-yard run on fourth down to put Brandon ahead 6-3. The PAT was no good.

On Brandon’s next series, Varnes hit Devin Thigpen for a 26-yard completion on third-and-10 to put the ball at the 6-yard line. Again the Vikings had another chance at a big defensive stop, and again Brandon converted. Varnes hit Miller for a 15-yard TD on fourth-and-goal, and Blount ran in the two-point conversion to make it 14-3 with 5:13 remaining.

“(Miller) made a good play and got behind our coverage. We knew he was a good receiver. Another one was a flat out bust on our part as far as alignment,” Morgan said. “Those are things that if you take them away it truly is a different night. It’s disappointing, but also moving forward trying to learn from it and get better and use it as a positive is how we’re going to approach it.”

Brandon’s final touchdown of the half was aided by a personal foul penalty following an incompletion. Instead of third-and-10 inside its own territory with about 30 seconds left until halftime, the Bulldogs had a first down.

Varnes hit Miller for a 39-yard gain, and then a 7-yard TD with 4 seconds left to send them into the locker room with a 21-3 lead.

“That was a big momentum swing. You can’t give them more chances,” Morgan said of the penalty.

Warren Central had some chances of its own, but couldn’t finish a couple of drives. It got the opening kickoff and held the ball for nearly six minutes before settling for a 28-yard field goal by Jonah Artman.

A trip inside the 30-yard line just before halftime ended with an interception in the end zone. Another in the fourth quarter resulted in a turnover on downs inside the 5-yard line.

The Vikings finished with 240 total yards. Jack Wright was 13-of-23 passing for 96 yards, and Maddox Lynch caught seven passes for 74 yards. Eric Collins Jr. was the leading rusher with 50 yards on 10 carries.

Those missed chances on offense, and the handful of mistakes on defense, were what bothered Morgan most — as much for what they didn’t do, as for how they turned the tide against his team.

“We didn’t finish a drive and you’ve got to do that,” Morgan said. “You’ve got to score. To hold them to 21 points, and how they scored those 21 points, if we played better it would have been fun to see what could’ve been.”