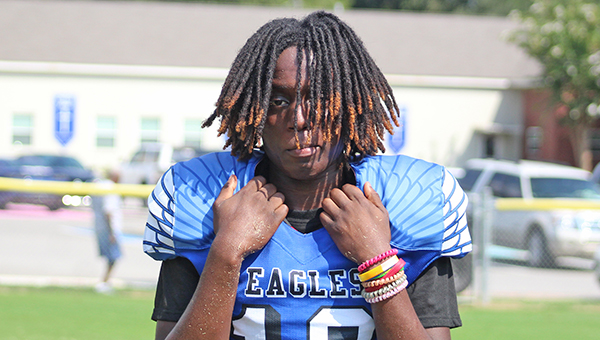 Porter's Chapel Academy running back Ty Mack rushed for 206 yards and a touchdown to lead the Eagles to a 50-42 win over Prairie View Academy on Friday.

Porter’s Chapel Academy snapped one long losing streak and gave itself a chance to end an even longer drought.
Ty Mack rushed for 206 yards and a touchdown, Jase Jung added 91 yards and two TDs, and Porter’s Chapel beat Prairie View Academy 50-42 on Friday for its first district win since 2018.

PCA (4-2, 1-0 MAIS District 3-A) ended a 12-game losing streak against league opponents. More importantly, it will now have a chance to win its first district championship since 2008 when it faces Tallulah Academy in the season finale on Oct. 21.

“It’s huge. We set ourselves up for a winner-take-all game in Week 10. We obviously have two games before that, but the winner in Week 10 is a top-three seed and gets a first-round bye,” PCA coach Blake Purvis said.

The Eagles earned their milestone victory on the back of one of their best offensive performances of the season. They rushed for 348 yards against the defending Class 2A champions and never trailed after John Wyatt Massey’s 1-yard touchdown run put them up 12-8 in the opening moments of the second quarter.

“We blocked numerous looks that they threw at us. I thought our lineman seemed to adjust to everything. We were still gaining yards, and a lot of them in big chunks. It was a very impressive game for them up front,” Purvis said. “But it wasn’t just the linemen. We blocked on the perimeter as well as we have all year. We blocked in space and didn’t have holding penalties. Blocking-wise, we had one of the cleanest games we’ve had all year.”

Massey only had 18 rushing yards, but ran for two touchdowns and threw for two more. He was 11-of-19 passing for 75 yards. Thomas Azlin caught an 18-yard TD pass, and Noah Porter a 5-yarder.

Azlin led PCA’s defense with 10 tackles, Mack had eight, and Jung had an interception.

Porter’s touchdown catch with 1:41 left in the game put PCA ahead 50-34. It was set up by a 33-yard run by Daniel Llopis on a fake punt on fourth-and-10 that moved the ball inside the 20-yard line.

“That was a huge play in the game,” Purvis said of Llopis’ run. “It gave us a first down, we took about another minute and a half off the clock, and we scored with less than two minutes left. We give the ball back to them only up eight, they down and score and we’re in a tie ballgame.”