LOOKING BACK: The fiery past of the 1300 Block 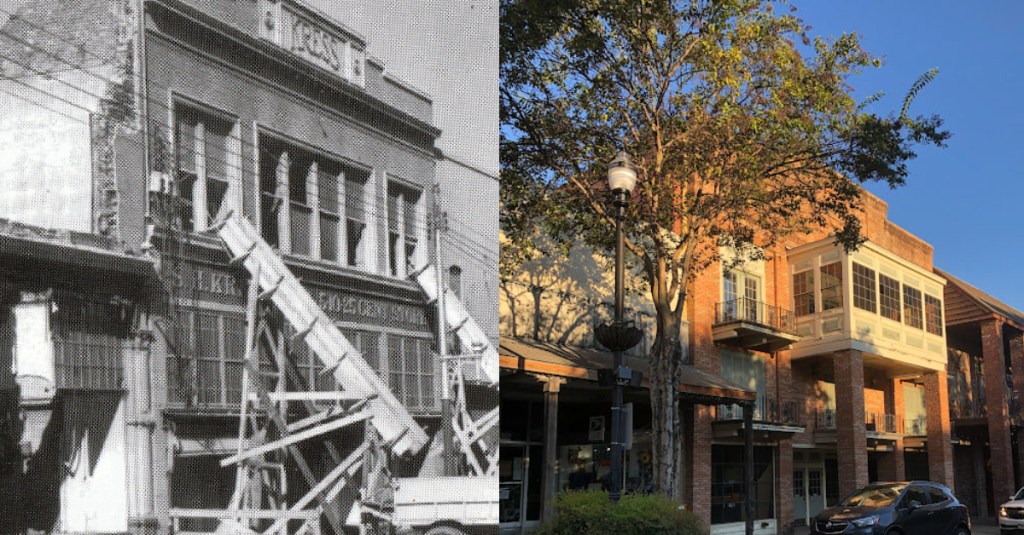 A fire on April 21, 1885, destroyed these buildings, as well as the four to the left and several behind them. The Vicksburg Herald gave the following account: “About 9:20 o’clock last night a fire alarm was sent in from the Famous Dry Goods Store, No. 163 Washington Street. Owing to the fact that several times before false alarms had been sent in on the eve of a parade (the next day was to be the anniversary parade by the fire department) by evil-disposed persons just to have the engines come out and tarnish their bright jackets, they were slow in coming out, in fact, hundreds of citizens were at the scene of the fire before a single-engine had made its appearance.

“This termed to be fully understood by all citizens present, as not a murmur was heard, but often the remark was heard, ‘Oh the firemen think it is a ruse.’ The fire started on the third floor of the Famous Dry Goods Store, to the left of Bloom’s, and then spread to the other floors, north to the roof of Bloom’s, south to the buildings on the corner and north to Bruser’s store. The fire then spread to the west along Crawford Street engulfing three other buildings including the wholesale liquor house of Joseph Podesta, which was entirely consumed.

“The walls of this building fell with a terrible crash and stopped its further westward course on Crawford Street, but the immense amount of liquors stored below were crushed by the falling walls and in consequence, a stream of burning alcoholic liquors went rippling along toward Mulberry Street in the rear of Cas. Asher’s drug store, and C.H. office igniting all woodwork in the basement windows of those two buildings and setting fire to a frame building on Mulberry Street, and occupied by several negro families, which was entirely consumed.”

The falling walls were also responsible for the deaths of five firemen and perhaps as many as 20 civilians.

The building that is on the right side of the current building was rebuilt by the owner, Mr. Podesta, and was completed by the end of 1885. The People’s Book and Music Store moved into the front of the first floor with a new bank, Merchants National Bank, occupying the rear of the first floor in January with a capital of $100,000.  Merchants moved to a new location later and Delta Trust and Banking Company made the first floor its home in about 1889 and stayed until 1915 when the bank went out of business. Merchants Bank occupied the building for a short time in 1916 while their building was undergoing renovations and then Wright Brothers Hardware moved in. By 1929, Kress and Co. occupied this half as well as the left.

The new building on the left side was not completed until late 1886 or early 1887 and was Wright Brothers Hardware Store until March 1903 when it was announced that S.H. Kress would open a store in the building and Wright Brothers moved.

As announced in the Vicksburg Herald, “Vicksburg is soon to have an institution that will appeal to the masses as well as the classes, S.H. Kress and Co., of New York, who operate a chain of 5 and10 cent stores throughout the South, having decided to put this city on their list.”

The building was remodeled and opened in June 1904. Following a fire in 1939, the building and its neighbor on the right were remodeled by architect John Donovan with yellow brick, polished plate glass and Opalite below, with prism glass steel sash transom panel above.

The building was damaged during the 1953 tornado, as is seen in the photograph. In the 1970s, the building was completely remodeled and with new brick veneer overlaying the yellow brick, and other non-historic additions.