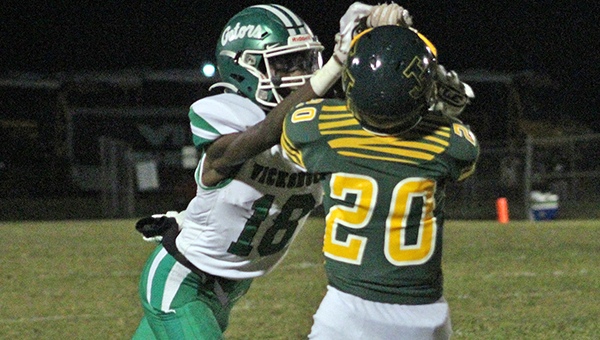 When the calendar flips from September to October, things start to change in the high school football world.

Games begin at 7 p.m. instead of 7:30. The evening air is a little cooler. And, most importantly, the games start to mean a whole lot more — as the Vicksburg Gators are about to find out.

The Gators (4-2, 4-0 MHSAA Region 2-5A) host undefeated Callaway (6-0, 4-0) Thursday night at Memorial Stadium. It’s the start of a late-season run of stakes games for the Gators — their last four opponents are all in the top half of Region 2-5A — and a chance to knock off a chief rival for a playoff berth.

“October is a very important month for any football team,” Vicksburg coach Todd McDaniel said. “October is the month that’s going to decide who’s going to win the district championship. Every district game is important, but the month of October tells the tale of the tape.”

Callaway has emerged as one of the biggest surprises in Mississippi through the first half of the season.

The Chargers haven’t had a winning record since finishing 14-1 and reaching the Class 5A semifinals in 2013. They’re already guaranteed of ending that streak, and can match their win total from the past three seasons combined by winning Thursday.

The Chargers have a balanced offense with three 300-yard rushers, and a solid defense that has only allowed more than 20 points in one of its first six games.

“They believe in what they’re doing. The kids have bought in to what Coach (Dameon) Brown is doing over there. They’ve closed their eyes and ears to a lot of outside influences and they’re playing good football,” McDaniel said.

Vicksburg is also trying to begin the next phase of its transformation into a championship contender. The Gators haven’t won a region title since 1990, and haven’t had two winning seasons in a row since 2007-08.

There is still plenty of work to do beyond this week to end those droughts, but beating Callaway is a big part of both goals.

Region 2-5A has separated into two tiers. Four teams on the bottom do not have a region win yet and are largely eliminated from playoff contention. The other five — Vicksburg, Callaway, Ridgeland, Neshoba Central and Holmes County Central — are in the top half, and the Gators’ remaining games are all against the others in that tier. A loss against any of them will essentially drop them two games behind because of head-to-head tiebreakers.

To handle Callaway, the Gators might need to elevate their game a bit. Even though they’ve been winning, small mistakes such as missed blocks and penalties have been costly. Vicksburg slogged its way through a 14-8 win over Provine last week that was a one-score game into the fourth quarter.

“I thought our kids really played physical. They pushed Provine around. But sometimes we pushed the wrong person,” McDaniel said with a chuckle. “That comes from moving (personnel on) the offensive line around. It happens. We were still good enough to win the football game.”

Fortunately, the defense has held opponents to a total of 22 points through the first four district games and is allowing an average of just 8.7 per game for the season. McDaniel believes the offense will become more consistent in the second half of the season, and the two halves can become a whole lot of trouble for opponents.

“If we can come out and continue to play great defense like we’ve done all year, our offense starts to pick it up a little bit more, we can be a really good football team,” McDaniel said. “Fortunately we’re 4-0 in the district, but we have a tough game here on Thursday night. We have to be able to line up and handle our business.”