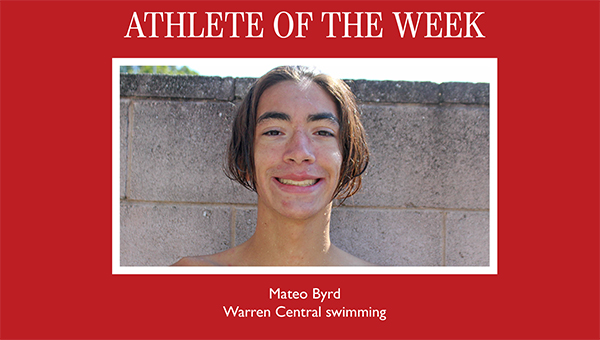 Mateo Byrd achieved his quest to swim everything — and to become The Vicksburg Post’s Athlete of the Week.

The Warren Central swimmer received 238 of 664 votes cast in an online poll by The Post’s readers to become the latest winner of the weekly award.

Byrd won two events at the VWSD Rumble on the River meet Sept. 23 at City Pool. He finished first in the 100 yard backstroke in 1:04.32, and was on the winning 400 freestyle relay with Noah Jones, Ashtin Wallace and Jacob Byrd. The same team finished second in the 200 freestyle relay.

Even more impressively, Byrd has qualified for the MHSAA Class II North State meet in all 11 events, although he will only be allowed to compete in four. The North State meet is Oct. 14 at Delta State University in Cleveland.

Congratulations to Mateo and the other nominees, and thank you to our readers for voting.