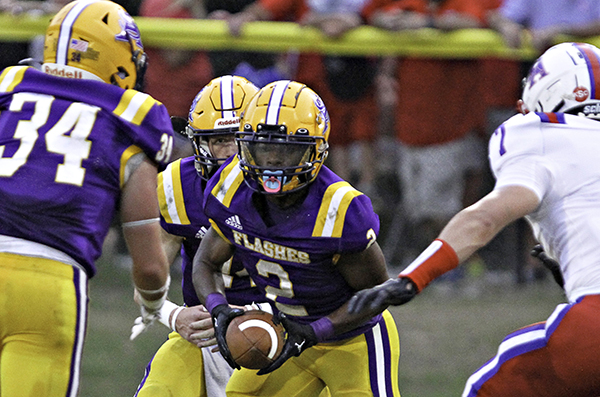 St. Aloysius has endured enough injuries and losses this season to last a lifetime. A six-game losing streak snuffed out its playoff hopes.

And, somehow, the hardest part is just beginning.

For their homecoming game on Friday night, the Flashes (1-6) will face MAIS Class 5A power Copiah Academy (6-1). It’s the first of three straight games to end the season against teams with one or zero losses.

“They’ve got a bunch of good-looking kids. Their quarterback is probably the best we’ll face all year,” St. Al coach Bubba Nettles said. “So we are prepped for a pretty good football team — probably the best in 5A, and would probably be close to the top three in 6A.”

With the season skidded off into a ditch, Nettles said the Flashes are approaching the final stretch of the season differently. Injuries have forced a number of freshmen and sophomores into starting roles. Giving them playing time and preparing for 2023 and beyond is as much a goal as being competitive for the rest of 2022.

“It’s not the ideal situation, but I think two or three years from now you and I will be sitting here laughing about how bad it was two years ago,” Nettles said.

As he has all season, Nettles praised his younger players for how they’ve handled a difficult situation. Eight Week 1 starters have missed at least one game because of an injury, and two-thirds of the available players for last week’s 35-0 loss to Clinton Christian were freshmen or sophomores.

“All summer and most of August, we weren’t naive to the fact or crazy to think something like this wouldn’t happen,” Nettles said. “We preached to them all last spring and summer that we are an injury or two from you having to play. So you have to make sure everything you do is to the best of your ability, maximum effort, so when the time comes you’ll be ready to go. Those ninth-graders have really worked their tails off.”

Nettles also heaped plenty of praise on his senior class for how it has handled things. There are 10 seniors on the roster and, Nettles said, they’ve provided strong leadership and guidance to their younger teammates.

Whatever success the Flashes have over the next few years, Nettles said, this year’s senior class will have played a valuable role in it.

“As sad as it is to say, it has turned into a seniors help guide the younger kids for the future. That will be their legacy left on the program,” Nettles said. “They’re going to leave a great legacy to battle through what they’ve battled through as juniors and seniors with what seems to be insurmountable obstacles with the schedule, and they’ve still come out and still played football.”