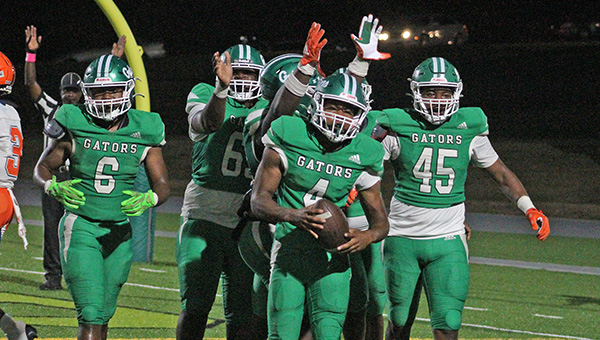 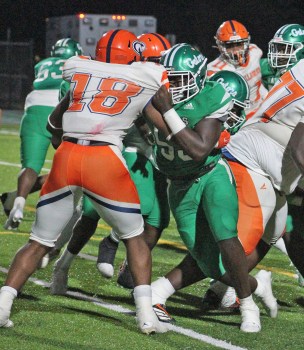 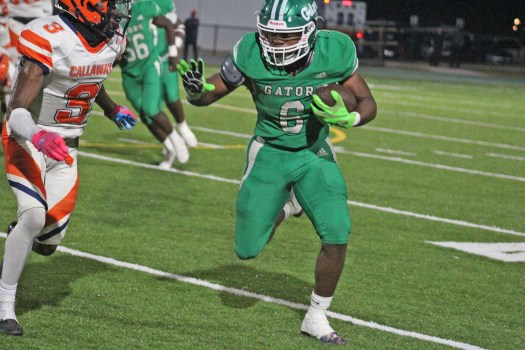 Vicksburg High running back Malik Montgomery (6) carries the football against Callaway. Montgomery ran for 84 yards and a TD as the Gators won 30-7. (Ernest Bowker/The Vicksburg Post) 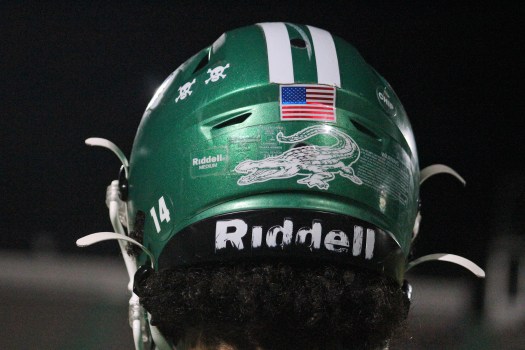 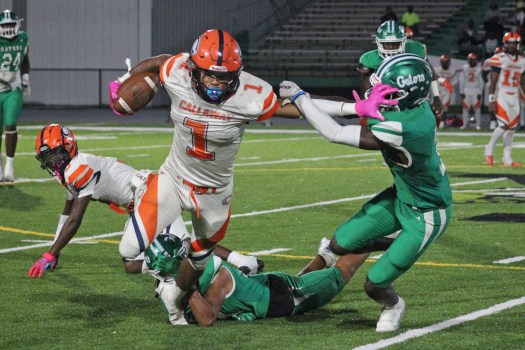 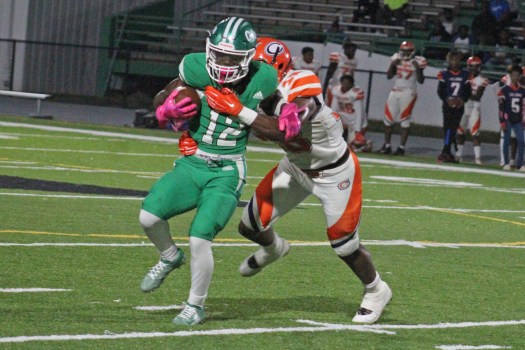 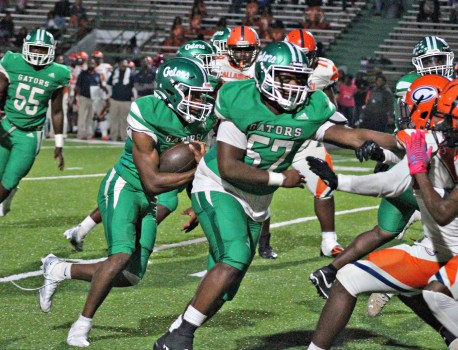 The Vicksburg Gators had been waiting six weeks to play a complete game on both sides of the ball.

They finally did it when it mattered most.

Alex Jefferson ran for 50 yards and three touchdowns, Malik Montgomery had 84 yards and one touchdown, and the Gators dominated previously undefeated Callaway 30-7 on Thursday night.

“We have been flipping and flopping all year long. We’ve been playing musical chairs with our offensive line, and over the past two or three weeks we could see them getting better and better,” Vicksburg coach Todd McDaniel said. “But tonight was the first night they really came out and put it together like we should. We saw the real Vicksburg High tonight.”

This was a first big step toward ending a 32-year region championship drought for Vicksburg (5-2, 5-0 MHSAA Region 2-5A). The victory kept the Gators in the driver’s seat in Region 2-5A and gave them a crucial head-to-head tiebreaker over fellow playoff contender Callaway (6-1, 4-1).

Vicksburg goes to Ridgeland next week, and can clinch a playoff berth with a win there.

“This win put us in a good situation. 5-0, you couldn’t ask for nothing better,” Jefferson said. “We’re just trying to perfect it, so we’ve got to come back and put work in next week.”

The Gators used two long passes to get out in front of Callaway, and then two long drives to put the game out of reach.
After going three-and-out twice to start the game, the Gators faced another third down on their third drive.

Montgomery ripped off a 14-yard run to keep it alive, and then Ronnie Alexander threw down the seam to DeCorey Knight for a 39-yard gain to the Callaway 6-yard line.

Two plays later, Montgomery punched it in from the 1 to put Vicksburg ahead 6-0 with 2:48 left in the first quarter.

In the second quarter, a similar pass play resulted in a 69-yard completion from Alexander to Johnny Smith Jr. Jefferson scored the first of his three touchdowns on an 8-yard run two plays later, and Montgomery took in the two-point conversion for a 14-0 halftime lead.

Then, in the third quarter, the Gators put together the kind of offensive drive they’d been waiting all year for. Starting from their own 5-yard line with 5:54 left, they marched all the way down the field for a 14-yard TD run by Jefferson early in the fourth quarter.

The drive covered 95 yards, lasted 14 plays, and took 7 minutes and 44 seconds off the clock. All 14 plays were runs. Vicksburg did not throw a pass in the second half.

“It’s always fun to move the ball on your opponent all down the field and they can’t do nothing about it,” said Montgomery, who had four carries for 20 yards on the drive.

Vicksburg iced the game with another clock-bleeding drive later in the fourth quarter. It only covered 37 yards, but took nearly four minutes off the clock before Jefferson scored on an 11-yard run with 3:52 to go.

“I always judge my offenses on how well we can put together a 14- or 15-play drive without any mistakes. That means we’re a really good offense. They started to do that tonight,” McDaniel said.

Jefferson, a 180-pound junior, ran over the last defender at the goal line to get into the end zone, then added the two-point conversion as well to make it 30-7.

“It feels good. I’d never done that,” Jefferson said of trucking his way into the end zone.

Callaway’s lone touchdown came on a 38-yard run by Kedarius Wade on the opening possession of the second half. Wade finished with 62 rushing yards on 10 carries, with 56 of his yards coming on that touchdown drive. Other than that one slip up, though, the Gators dominated defensively.

Callaway had four three-and-outs among nine possessions, and its quarterbacks were sacked three times. Vicksburg’s Wallyeke Curry had two sacks and Demarcus Johnson had one. Dennis Battle had an interception that set up the Gators’ final touchdown drive.

McDaniel said a rash of injuries had slowed his team down recently, and it was good to see them break out.

“We have been winning, but we haven’t been dominating and we expect domination.” McDaniel said. “When you have 15 injuries it tends to slow you down. Kudos to my coaching staff and my kids. They played great tonight.”