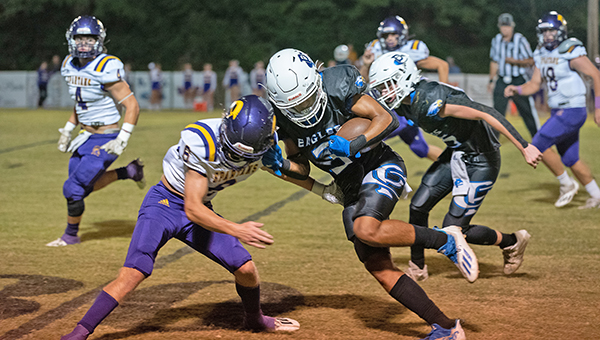 Porter's Chapel Academy running back Jase Jung (3) takes on a Prairie View Academy defender during last week's game. PCA will go on the road this Friday to play Prentiss Christian. Kickoff is at 7 p.m. (Carrie Martin/GSPhotography)

Porter’s Chapel Academy has entered the eye of the storm.

The Eagles are coming off a huge district win over Prairie View Academy, and will have a shot at the MAIS District 3-2A championship when they play Tallulah Academy on Oct. 21.

In between are two games that will fill time and build momentum. The first is this Friday, on the road at Prentiss Christian.

“We’ve got to keep doing what we’ve been doing since Week 2, and that’s focusing on ourselves. We’ve got to control what we can control,” PCA head coach Blake Purvis said.

No matter what happens against Prentiss Christian and Christian Collegiate Academy next week, PCA will still be the No. 2 or 3 seed in the MAIS Class 2A playoffs if it beats Tallulah Academy. The three district champions receive the top three seeds and a first-round bye.

PCA’s playoff status is also secure. Twelve of the 16 teams in Class 2A qualify for the postseason, and PCA is currently seventh in the power points rankings that determine wild card berths.

The real importance of the next two games for the Eagles is as a fallback plan in case they don’t beat Tallulah. Beating Prentiss Christian (3-4) and Christian Collegiate (5-2) will likely make them the No. 6 or 7 seed in the bracket. That guarantees a home game in the first round and should put them on the opposite side of the bracket from several of the tougher Class 2A heavyweights.

PCA (4-2) has won three of its last four games, and Purvis believes it has a chance to do some damage in the playoffs with the right matchups.

“The way we’re playing right now, if we continue to build, we’re doing what we hope to do and that’s playing our best football down the stretch,” Purvis said. “We can’t get too relaxed or too confident in what we’re doing on Friday night.”

The Eagles’ confidence is certainly high following last week’s 50-42 victory against Prairie View. It was PCA’s first district win since 2018 — it had lost 12 in a row since then — and rushed for nearly 350 yards in the process.

“If we can execute like that in the run game we’re going to be a very tough matchup for sure,” Purvis said.

Besides being important to their district title hopes, Purvis said it was a pivotal victory for the program as a whole. Beating the defending Class 2A champion is a sign that Porter’s Chapel is ready to establish itself as a state championship contender.

“It’s a win we’ve been looking for,” Purvis said. “Last year we got a win against Wilkinson County (Christian), but beating one of those 2A teams that’s in the conversation every year validates what we’re doing and that we’re moving in the right direction more than we ever have.”