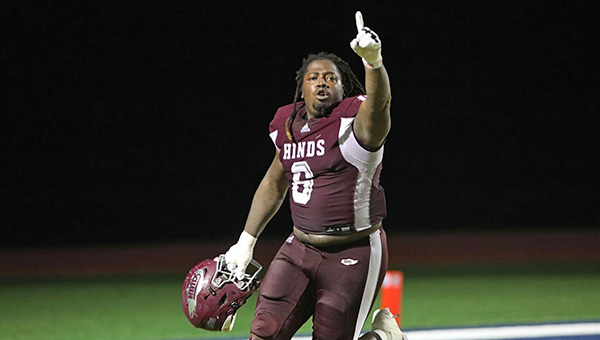 A week after nearly overcoming a huge deficit, Hinds Community College had the script flipped on it Thursday night — but survived.

Hinds let a 23-point lead dwindle down to one score before hanging on to beat Southwest Mississippi 30-24.
Jeffrey Pittman rushed for 109 yards and a touchdown for Hinds (3-3, 3-1 MACCC South), while Ranson Oakes was 15-of-21 passing for 222 yards and one touchdown.

Hinds trailed Jones College 24-0 last week, came back to get within seven points, but ultimately lost 31-24.
Ben Duncan also kicked three field goals as the Eagles cruised to a 23-0 lead late in the second quarter against Southwest Mississippi (2-4, 1-3)

Southwest got on the board with Tres Ladner’s 22-yard field goal on the final play of the first half, and then got hot late. Christopher Roberson threw three touchdown passes in the last 18 minutes, the last a 15-yarder to Jeremiah Ratliff with 4:19 left in the game, to pull the Bears to within 30-24.

Hinds punted on its next possession, but was able to bleed the clock all the way down to 33 seconds remaining before giving the ball back. The Bears were unable to move it past their own 19-yard line before time expired.

Hinds will go on the road next Thursday to play Itawamba Community College.

Putt threw a 26-yard TD pass to Kris Sides late in the third quarter, and a 26-yard TD to Kylan Garrett with 6:52 left in the fourth to put Northeast Mississippi ahead 34-13.

East Central quarterback Gabriel Larry was 21-of-31 passing for 157 yards and a touchdown, and also carried the ball 21 times for 97 rushing yards.

Former Warren Central star Brandon Gilliam kicked two field goals and was 2-for-2 on PATs for East Central. Another former Viking. T.J. Thompson, had a team-high 10 total tackles and a forced fumble, while his brother Jaylin Thompson made four tackles.

Cam Thomas ran for 89 yards and a touchdown for Gulf Coast, which overcame a 14-point deficit in the first half. All of McNulty’s touchdown passes, including an 89-yarder to John Brown, came in the second half.

Hefley was 21-of-35 passing for 289 yards. Drea Shumaker caught three passes for 100 yards and a touchdown, Jaycob Horn eight for 87 yards and two TDs, and D.T. Sheffield five for 84 yards and one TD.

Zae Davis had six receptions for 131 yards and two touchdowns for Itawamba, and Shamar Sandgren six for 102 yards and one TD. Davis’ 65-yard touchdown reception with 4:05 left in the game put Itawamba ahead 35-25 and effectively sealed the win.

Holmes quarterback NyJal Johnson was 51-of-84 passing for 412 yards and three touchdowns. A.J. Davis had 10 receptions for 125 yards.