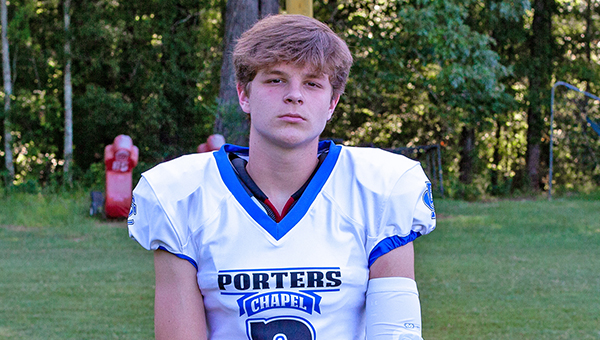 Porter's Chapel Academy wide receiver Taylor LaBarre tied a school record with 11 receptions, and had 133 receiving yards in a 42-6 loss to Prentiss Christian on Friday.

A trip to South Mississippi turned south in a hurry for Porter’s Chapel Academy.

Prentiss Christian scored three touchdowns in the second quarter to take control of the game, and had three scores of 40 yards or longer, as it handed Porter’s Chapel a disappointing 42-6 loss on Friday.

Porter’s Chapel (4-3) had several drives inside the red zone lead to no points, and fell behind 26-0 by halftime.

“It was just a rough one. They jumped on us, they played very well and they played hard. We just dug too big of a hole and couldn’t get ourselves out of it,” PCA coach Blake Purvis said. “We couldn’t come up with the plays when we needed them. We put some good drives together and couldn’t cash in when it counted.”

Porter’s Chapel did not score until Jase Jung punched in a 4-yard touchdown run with 3:36 left in the game. As a team, the Eagles had minus-3 rushing yards although they did find some success through the air.
Quarterback John Wyatt Massey was 22-of-38 passing for 248 yards, with no touchdowns and one interception.

Taylor LaBarre caught 11 passes for 133 yards, and Jung had nine for 86 yards.

The loss was a deflating one for Porter’s Chapel, which was coming off a big district win against Prairie View. The Eagles will return home to play Christian Collegiate Academy next week, and then have a winner-take-all showdown with Tallulah Academy for the MAIS District 3-2A title on Oct. 21. Porter’s Chapel is all but assured of at least a wild card berth in the Class 2A playoffs.

The loss to Prentiss Christian (4-4) might have hurt the Eagles’ seeding if they wind up as a wild card, but Purvis noted that it won’t matter if they rebound and beat Tallulah to end the regular season.

“It’s obviously a disappointing loss. It hurts us in power points,” Purvis said. “But the good news is we still have a district championship to play for in two weeks, and we can take power points out of the equation.”