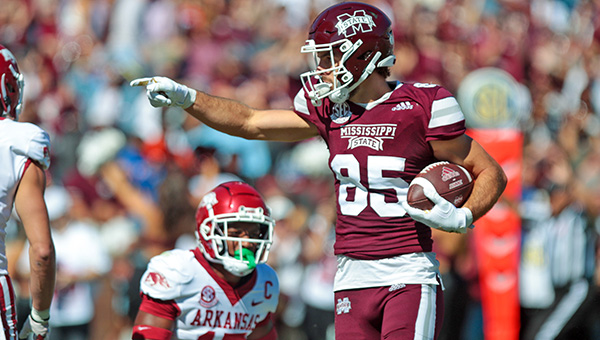 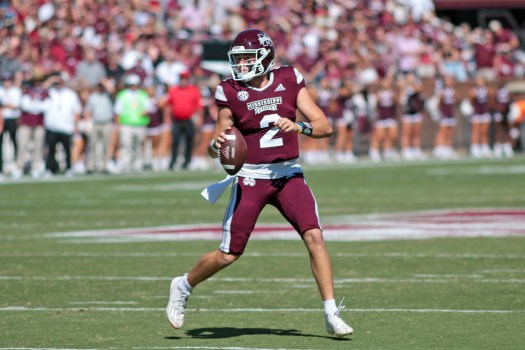 Mississippi State quarterback Will Rogers (2) looks for a receiver during Saturday's game against Arkansas. Rogers passed for 395 yards and three touchdowns to lead the Bulldogs to a 40-17 victory. (Walter Frazier/For The Vicksburg Post) 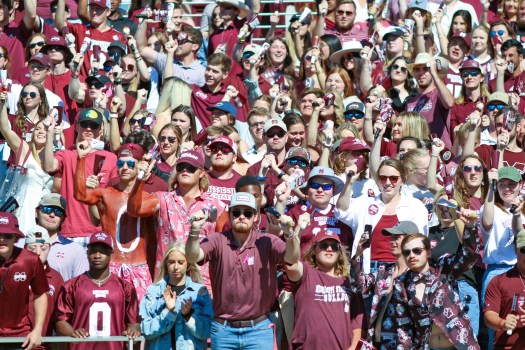 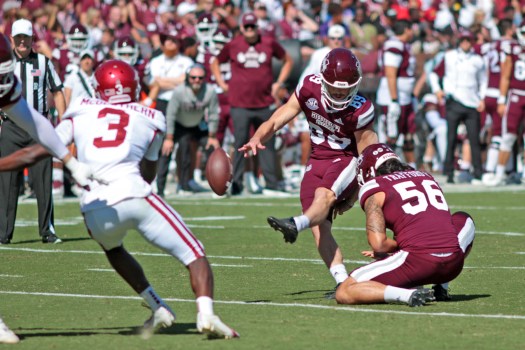 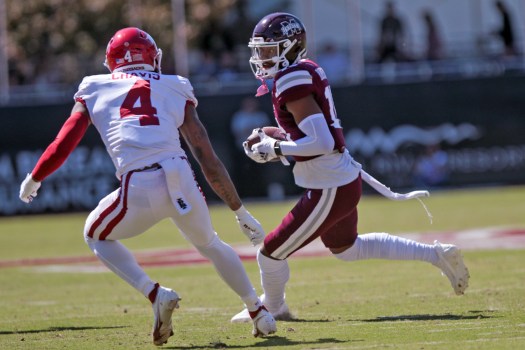 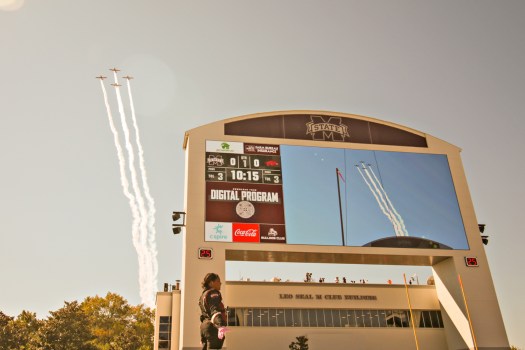 Three planes performa a pregame flyover of Mississippi State's Davis Wade Stadium prior to the Bulldogs' game against Arkansas on Saturday. (Walter Frazier/For The Vicksburg Post) 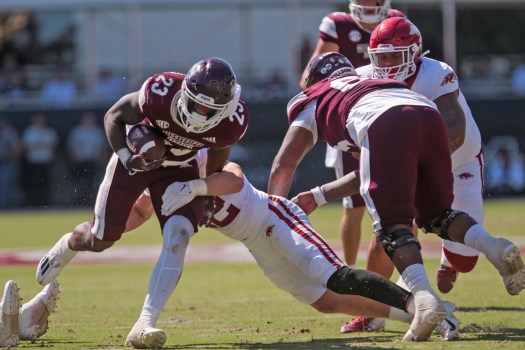 Mississippi State running back Dillon Johnson (23) tries to run through a tackle against Arkansas. Johnson ran for 100 yards and two touchdowns as the Bulldogs won 40-17. (Walter Frazier/For The Vicksburg Post)

A three-man front with eight players dropping in coverage made for a rough night for the Mississippi State offense. That game plan did not work on Saturday.

Will Rogers threw for three touchdowns and broke the Southeastern Conference mark for career completions, and the 23rd-ranked Bulldogs ran for their most yards with Leach in charge in a 40-17 win over the Razorbacks.

“The more that we can run the ball and get extra guys in the box, the more it’s going to open up a passing lane,” Rogers said. “I think that helps us be on pace.”

Rogers was 31-of-48 passing for 395 yards and broke the SEC mark in he first quarter with the 922nd completion of his career, eclipsing the mark set by Georgia’s Aaron Murray in 52 games. Rogers, a junior, has played in 28 games.

The Bulldogs (5-1, 2-1 SEC) rushed for more than 100 yards for the second straight week for the first time with Leach as coach. Dillon Johnson gained 100 rushing yards, the first to do that in Leach’s three seasons, and scored twice.

The running backs took advantage of the Razorbacks’ three-man rush. Johnson and fellow running back Jo’Quavious Marks had 46 total touches in the game for 281 yards rushing and receiving combined, and accounted for three touchdowns.

“I think we have three really good running backs and you want them to touch the ball. You had Dillon on the ground and Woody through the air,” Leach said. “Those guys are the warriors back there and you want them to have the ball, and for good measure you’re going to ask them to block. I thought they had a good game.”

Arkansas played without starting quarterback KJ Jefferson, who had an unspecified injury. Malik Hornsby was 8-of-17 passing for 234 yards in Jefferson’s absence, with one touchdown and two interceptions. He also rushed for 114 yards on eight carries.

Raheim Sanders ran for 86 yards and a touchdown for Arkansas. Receiver Jadon Haselwood had 113 yards on three catches.

“Obviously, they outplayed us and were the most physical team today,” Arkansas coach Sam Pittman said. “Will Rogers is a really good quarterback and managed the game for them well. We couldn’t convert situations and they did. Give them credit, Coach Leach did a great job with them.”

Mississippi State scored the first 14 points, but the Razorbacks (3-3, 1-3) hung around, trailing just 21-10 at the half thanks to a missed field goal and turnover on downs by the Bulldogs’ offense late in the second quarter.

MSU put the game away in the fourth quarter with back-to-back interceptions from Jackie Matthews and Emmanuel Forbes.

The Razorbacks had 483 yards of offense but surrendered 568 to the Bulldogs. State’s 4-for-4 showing in the red zone continued a strong start of scoring on 20 of 21 trips this season, with 11-straight touchdowns on those trips.

“I think we’re a mature team now,” Rogers said. “I think the past two years, we were considered a young team. A young team might come in here and drop a game at home still thinking about what happened at LSU or something like that…These past three games, the homestretch has been really good.”