Warren Central grinds out a region win against Northwest Rankin 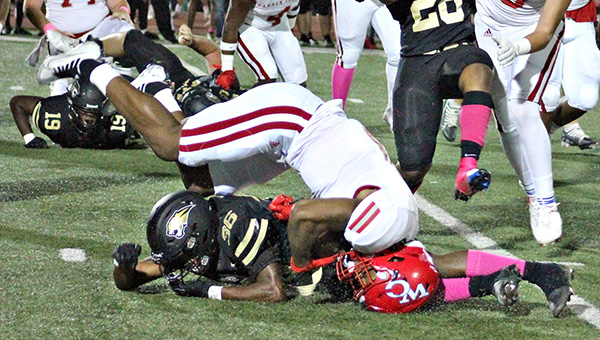 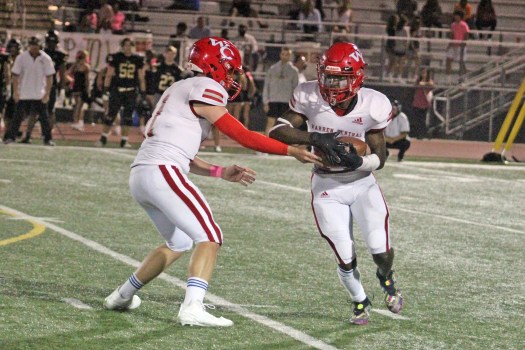 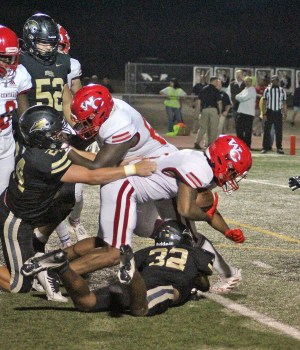 Warren Central's Trey Hall fights through a tackle for a first down late in the fourth quarter Friday against Northwest Rankin. Hall finished with 99 total yards and two touchdowns as the Vikings won 35-28. (Ernest Bowker/The Vicksburg Post) 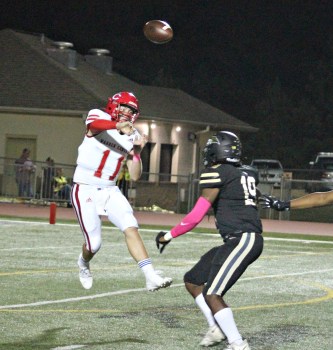 Warren Central quarterback Jack Wright (11) throws a pass over Northwest Rankin defensive end Mikai Kelsey (19) in the first half of Friday's game. Wright completed 10 of 16 passes for 132 yards and one touchdown in the Vikings' 35-28 victory. (Ernest Bowker/The Vicksburg Post)

FLOWOOD — Friday’s matchup between Warren Central and Northwest Rankin felt as much like a desperate footrace to the finish line as it was a football game.

Warren Central never could get very far ahead of the Cougars, but it stayed one step ahead and that was enough.

Trey Hall and Eric Collins each scored two touchdowns, and the Vikings grinded out two long drives in the fourth quarter to kill the clock and beat Northwest Rankin 35-28.

“When we would score, they made some plays offensively to answer right back. Whatever momentum we had, they were just not going away,” Warren Central coach Josh Morgan said. “They kept hanging around and kept fighting, and we could just never go on and take control of the game. They kept fighting for it too, and that’s why these district wins are hard to come by.”

The win was a big one for Warren Central (5-1, 2-1 MHSAA Region 3-6A). It handed Northwest Rankin (2-4, 2-1) its first region loss, earned a head-to-head tiebreaker against another likely playoff contender, and regained some positive momentum after losing to Brandon last week.

“This is a good win because last week we lost and took a lesson,” said Hall, who had 99 total yards.

Warren Central gained the lead by scoring two touchdowns on back-to-back plays from scrimmage in the first quarter. Collins ripped off a 50-yard TD, and then Romeyko Truitt returned a fumbled snap 23 yards for another touchdown on Northwest Rankin’s next play.

Truitt’s touchdown put the Vikings ahead 14-7. They never trailed again, but they couldn’t shake Northwest Rankin either.

Dylan Lewis ran for 243 yards and a touchdown on 38 carries, Wes White threw two touchdown passes, and Christian Baglione kicked two field goals for the Cougars. Lewis’ 13-yard TD run with 3:14 left in the third quarter, as well as his ensuing two-point conversion run, pulled them within 28-25.

Northwest Rankin, though, barely saw the ball the rest of the game.

Warren Central went on a 16-play scoring drive that took 7:50 off the clock. It converted one third and two fourth downs along the way, including a 2-yard touchdown run by Hall out of the wildcat formation. The score pushed the Vikings’ lead back to 35-25 with 7:24 to go.

“I’m used to it. We do it at practice. It’s just like fourth-and-1. I had to get in there no matter what,” Hall said. “Anybody gets in my way I’m going to run through them. It’s them or me.”

Northwest Rankin answered with a 42-yard field goal by Baglione at the end of a drive that took about 2 1/2 minutes, to get back within a touchdown. Then Warren Central got the ball again and never gave it back.

Hall deftly avoided a tackler in the backfield and gained four yards to convert a critical third-and-2 with two minutes to go, and the Vikings were able to run the last 4:48 off the clock.

In all, Warren Central had control of the ball for 12 minutes and 38 seconds out of the last 15:14 of game time.

“We didn’t want to give them the ball back. We practice that four-minute offense where we’re picking up first downs, and it’s just like a touchdown when you get a first down,” Morgan said. “We were able to milk it out there toward the end, and I’m very proud of that. We had some very good drives. I think our offense played its best game of the year.”