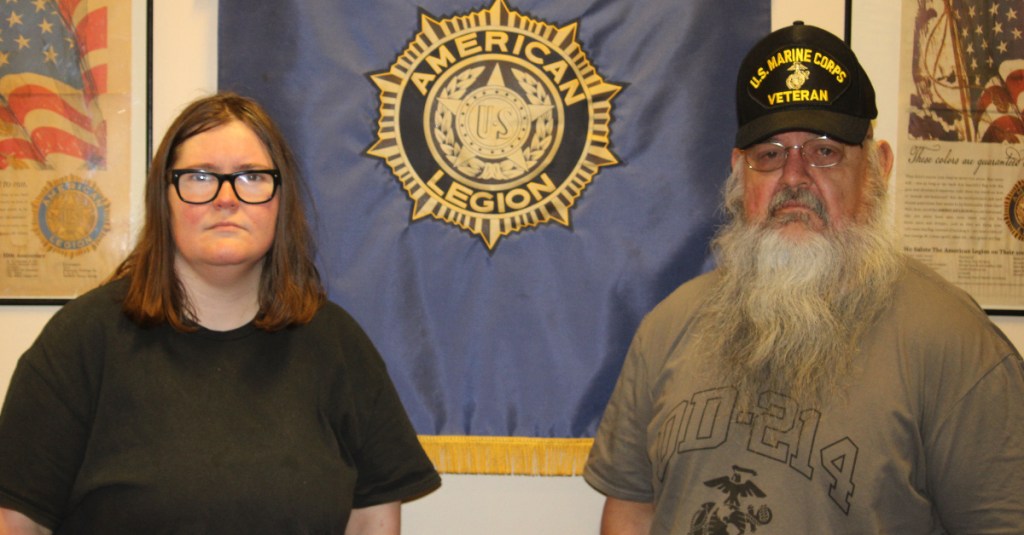 Amanda Sharp, left, and her father Randy Sharp serve as chaplains for Post 3 of the American Legion Allein Post 3 and Auxiliary. They are the first father-daughter chaplains for the Legion in Mississippi. (Photo by John Surratt | The Vicksburg Post)

“To you is given the spiritual leadership of this post.”

According to the American Legion’s Chaplain’s Handbook, that is the first line of the charge, or call of duty, for post chaplains when they are sworn into office.

Randy, who previously served as the Post’s sergeant-at-arms, said he was surprised they were both elected to the same posts. He was initially appointed chaplain after Steve Assenheimer, the post’s long-time chaplain, was no longer able to continue his duties.

“They called out the roll and said, ‘Chaplain’ and said, ‘Vacant,’” he said. “We (the members) just kind of looked at each other and a few minutes later they asked me if I would like to take over as chaplain. I did, and then I got elected chaplain this last election.”

“About 15 minutes later (after the roll call) they asked him to be chaplain and he said, ‘I’ll do it,’” Amber, who was elected chaplain by the auxiliary, said. The position is her first elected office.

According to the Legion’s Chaplain’s Handbook, the chaplain is the post’s spiritual leader and is an integral part of all American Legion ceremonies, “Especially the installation of officers, the initiation of new members, the dedication of halls, monuments or colors and funeral services and other rituals that are standard throughout the organization.

“The chaplain’s participation adds to the spiritual growth of the post and its members,” according to the handbook. “Also, a chaplain’s presence is valuable when members face illness or are ‘shut in’ by disabilities. Visitation that shows a concern for their welfare or tends to their needs will be welcomed and appreciated.”

When the Legionnaires, Auxiliary and the Sons of the American Legion meet at Post 3 on the first Friday of the month, Randy and Amber divide the duty of delivering the invocations, with Randy saying the opening prayer and Amber the blessing for the dinner and the closing prayer. A member of the Sons of the American Legion, Randy also says the opening prayer for that organization.

“If someone is in the hospital, we’ll go visit them,” Randy said. He said they also hold flags for veterans’ funerals and open programs and events.

He has been a member of Post 3 for about 21 years. A Marine Corps veteran, he was assigned to a Marine Corps Reserve unit based in Jackson that was activated during Operation Desert Storm.

“We went to Okinawa, Japan,” he said. “The whole unit went. There were six of us from Vicksburg; they called us the Vicksburg Six. We were over there for eight months.”

Randy joined Post 3 at the invitation of a friend.

Amber joined the auxiliary in 2018 but said, “I’ve been coming here since I was 14 as best as I can remember.”

“She’s been coming here ever since she was itty bitty,” Randy said.

And there is a legacy.

Randy’s father and stepfather were veterans. His stepfather served in World War II and Korea and his grandfather and uncle are Vietnam vets.

Father and daughter both say their elections as chaplains have given them a different view of being members of their respective organizations and they would like to remain chaplains.

“I enjoy it; it’s different, it’s nice to be able to serve and help the post. I’d like to stay. I enjoy doing it,” Randy said.

“I enjoy it; I’m helping the auxiliary out,” Amber said. “I want to stay as chaplain for a while.”