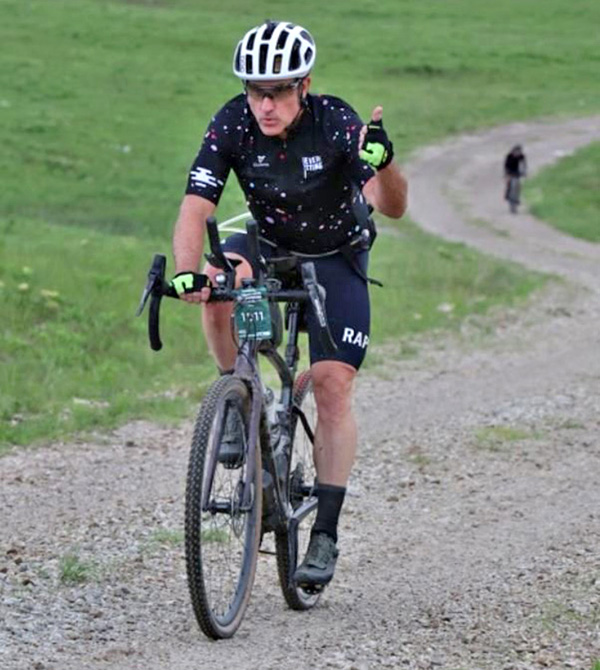 Vicksburg resident Joe Giambrone rides in the Unbound Gravel cycling race in Kansas in June. Giambrone is among a growing sect of cyclists who are participating in off-road gravel rides, such as the 300-mile Delta Epic scheduled for this weekend in North Mississippi. (Submitted to The Vicksburg Post)

Joe Giambrone has never backed away from a physical challenge.

Triathlons? Been there, done that, got a closet full of T-shirts to prove it.

So the Vicksburg resident went looking for the next challenge to conquer and found it — biking up and down the back roads of Mississippi and beyond, often in the dark, with only what he can carry on him.

Giambrone has become a participant in, and advocate for, the growing sport of “gravel riding.” It’s part bike ride, part back country adventure, in which riders head down dirt roads for hundreds of miles in endurance races.

“It definitely is different. It works different muscle groups. But it’s like the ultramarathon scene — you have to be a little different to do it,” he said.

Giambrone has long been an avid bike rider in and around Vicksburg. He said a decline in the local scene left him “lonely” on long rides, and a fall that broke his arm made him uneasy about dealing with traffic on two-lane roads.
Heading off onto the backroads and turnrows of rural Warren County was preferable.

“We found some great gravel in Warren County. It was great during the pandemic. You’re not riding as close to other people as you would on the road,” Giambrone said. “The thing we worry about with gravel, more than cars, are dogs and snakes. Every stick you see, you’re watching to see if it moves.”

Gravel bikes are built for off-road riding. They are a bit more robust than a road bike, and have different brakes, gearing and wider tubeless tires to handle uneven terrain. Other technology can be added for safety and navigation.

“We have GPS devices on our bikes, and I’m navigating off of that. It’s just like the GPS device in your car,” Giambrone said.

Giambrone participated in a 16-hour endurance ride in Kansas in June, helped chart a gravel road course for last weekend’s Bricks and Spokes ride in Vicksburg, and this weekend will take on another challenge with the Delta Epic in northern Mississippi.

The Delta Epic is a 300-mile race that started at midnight Friday at Arkabutla Lake in DeSoto County, and will end in Bentonia in Yazoo County sometime late Saturday night or early Sunday morning.

The course flows along dirt roads and turnrows through the most rural parts of a rural state. Riders are not allowed to make pit stops, so they must carry — or find — all of their food and water. Riders are allowed to purchase supplies from the few stores along the way or get them from other means like spigots and streams.

A small GPS device attached to the bike is the primary navigational tool. If the bike blows a tire or breaks, there is no one else to fix it.

“You can have a GPS, but you have to carry your own water and fuel and tools. You’ve got to carry your lights and battery chargers,” Giambrone said.

The course is mostly flat, Giambrone said, except for a 17-mile stretch around Satartia that has several difficult hills and comes deep into the race.

Two people finished the Delta Epic in 2021, its fifth edition. It took them 41 hours. Giambrone was hoping to do a little better and did. He covered 293.1 miles in about 26 hours — five of those hours were for rest and to deal with other issues — and finished around 2:30 a.m. Sunday.

Although he’ll certainly be sore on Monday, Giambrone is relishing the challenge of the Delta Epic and gravel riding in general. The rewards, like finding new roads and seeing places that are generally inaccessible to most people, are worth a little pain.

He wouldn’t mind some others joining him on the adventure, either.

“What I like about the gravel scene is it’s grassroots. You’re on your own out there. There’s some roads I found that I never knew about,” he said. “I wish it would take off a little more here. We only have a handful of cyclists who are doing it.”