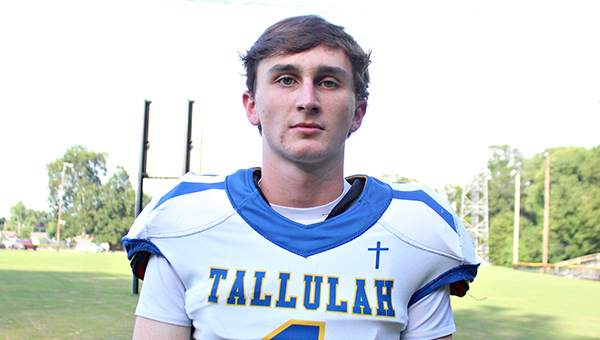 Tallulah Academy football player Arnett Sevier ran for a team-high 87 yards and a touchdown on only two carries in a 54-14 win over Discovery Christian on Friday.

Tallulah Academy prepared for two difficult and important games by rolling through an opponent who offered little resistance.

No players finished with more 100 rushing yards, although six of the eight who had a carry scored a touchdown.

Hopkins finished with 103 total yards — 59 rushing and 44 receiving. Boyte had the most carries, with eight, for a total of 75 yards.

Stewart Grady had an interception for Tallulah’s defense, which registered three sacks and allowed minus-14 rushing yards. Discovery Christian’s two touchdowns came on a pair of long passes after the game was well out of hand. Tallulah led 32-0 at the end of the first quarter and 48-6 at halftime.

Discovery Christian (1-7) has scored a total of 26 points this season and lost its seventh game in a row. Its only win was a forfeit over Hillcrest Christian in the season opener.

Tallulah, meanwhile, is steaming toward the MAIS Class 2A playoffs. It won its third game in a row and will play at Newton Academy (8-0) on Oct. 14 in a matchup of district leaders.

After that, the Trojans will finish the regular season at home on Oct. 21 against Porter’s Chapel in a winner-take-all showdown for the District 3-2A championship. Both teams are 1-0 in district play.