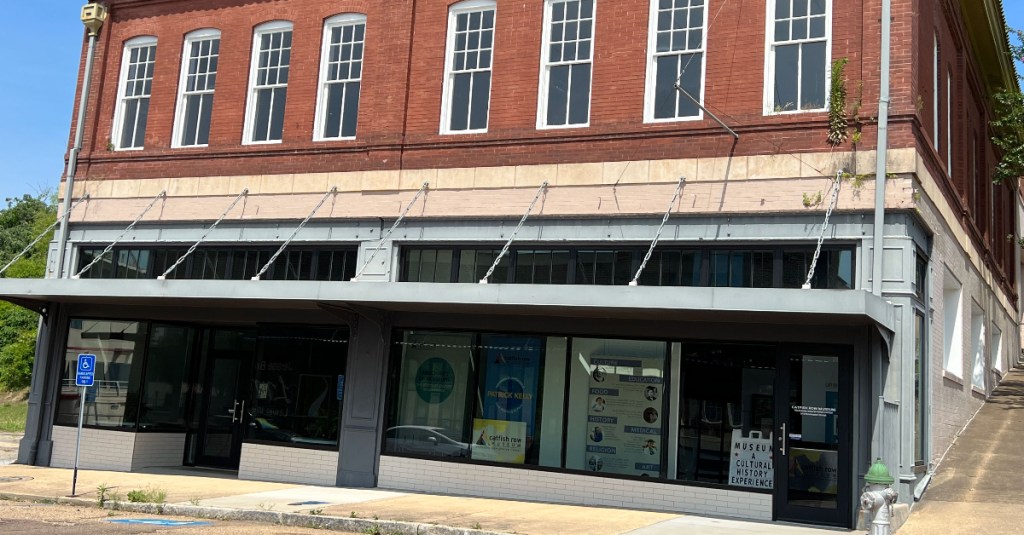 The Catfish Row Museum is located at 913 Washington St. in Vicksburg. (Photo by Anna Guizerix)

The development of a demonstration and teaching kitchen at Catfish Row Museum received a boost Monday when the Board of Mayor and Aldermen approved a $36,500 allocation for the project.

The donation, which came from $3.5 million in state funds for the city’s riverfront development project, is the third grant received by the museum in recent weeks. The Warren County Board of Supervisors recently approved $36,500 in American Recovery Plan Act funds for the kitchen.

The museum also received $25,000 from the Lower Mississippi Delta Initiative, a program administered by the National Park Service, which also approved $17,950 to repair and protect the interior of the Monte Carlo Building, focusing on safeguarding an existing mural, protecting artifacts by installing UV window protection and repairing roof leaks, according to the Initiative.

“Exciting things will happen at the Catfish Row Museum,” museum Executive Director Linda Fondren said. “We are thankful to our board of directors and highly grateful to be awarded $73,000 from the city and county to help make our downtown and riverfront even more inviting.”

Plans for the kitchen began in 2020 at the height of the COVID-19 pandemic, in a move to build on past successes the city had when it received the Robert Wood Johnson Foundation Culture of Health Prize.

“We requested assistance through the USDA Local Foods, Local Places program to identify the best practices for promoting a healthy community and vibrant downtown,” Fondren said.

The result was a steering committee that developed a two-day virtual workshop involving 35 people representing the Vicksburg community, local and regional organizations and 15 federal partners to discuss community needs in the downtown area and other programs to attract more tourists and vendors while supporting local businesses.

“One of the action plans was to unite two established local institutions, the farmers market and community garden, in a downtown food hub to include a demonstration kitchen and educational center in the Catfish Row Museum,” Fondren said.

Because the museum is located in a historic building and unsuitable for a kitchen space, Fondren said museum officials worked with representatives of Middleby Corp., which owns Viking ranges, which introduced officials to the company’s ventless kitchen solution.

“We are thankful for a tour of their Dallas showroom and for hosting us at the Viking factory and cooking school in Greenwood,” she said. “We’re hoping the demonstration/teaching kitchen will be a gathering place for residents and tourists.”

Thanks to a partnership with Ali Hopson, a registered dietitian at Merit Health River Region, and others, Fondren said, the teaching kitchen will be a learning laboratory for life skills to teach local residents how to eat, cook, and think more about what is good for our health.

To help drive tourism, she said, the museum will provide engaging and interactive cooking experiences around the foodways of the Mississippi Delta, showcasing the roots of southern cooking.

“The museum will host private cooking demonstrations, kitchen rentals — a fun and creative way to host a meeting or celebrate with a group,” she said. “We are working with our library and local organizations for kids’ cooking classes — to learn how fun and easy cooking can be. We hope to have the kitchen completed before spring.”