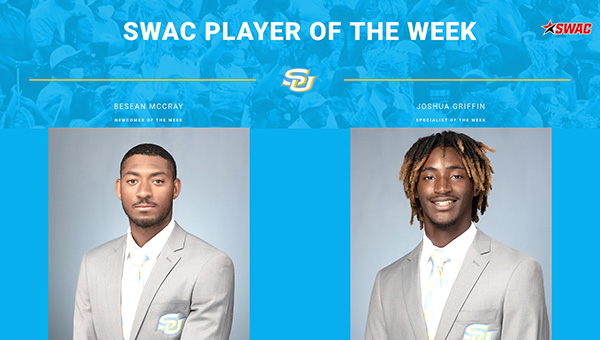 Three players with Mississippi ties, including one from Vicksburg, reeled in this week’s Southwestern Athletic Conference football Player of the Week awards.

Southern University kicker Joshua Griffin and quarterback Besean McCray were the league’s Specialist and Newcomer of the week, respectively, while Jackson State quarterback Shedeur Sanders was the Offensive Player of the Week.

Florida A&M’s Isaiah Major was the Defensive Player of the Week.

Griffin is a sophomore and a Warren Central alum. He made a 40-yard field goal and went 6-for-6 on PATs in a 45-13 win over Prairie View A&M on Oct. 7. He also had two touchbacks on eight kickoffs.

McCray, a sophomore who previously played at Hinds Community College, had 360 yards of total offense in the win over Prairie View. McCray was 16-of-22 passing for 275 yards and two touchdowns. He also ran for 85 yards and scored two rushing touchdowns.

Sanders, meanwhile, completed 30 of 46 pass attempts for 332 yards and three touchdowns during Jackson State’s 26-12 win over Alabama State. He threw touchdowns of 35, 25, and 16 yards while completing passes to 10 receivers.