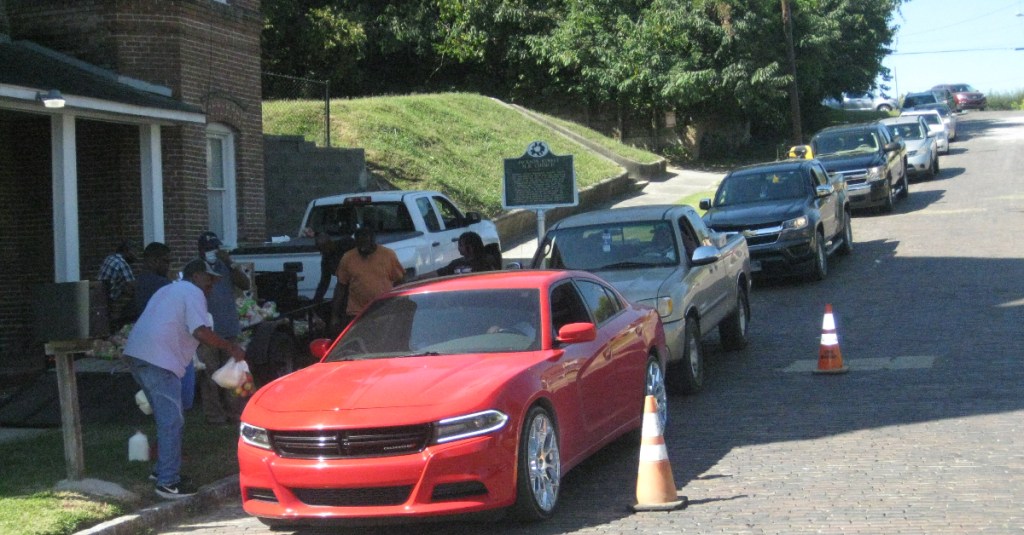 Cars form a line on Jackson Street as they prepare to pull up to Jackson Street MB Church to receive groceries. The church, which distributes groceries to residents once a month, was holding a separate distribution Tuesday after getting food from the Mississippi Food Network in Jackson. (Photo by John Surratt | The Vicksburg Post)

A group of Vicksburg residents had the opportunity Tuesday to stock up on needed groceries as Jackson Street Missionary Baptist Church held a special food distribution.

The line of cars waiting to pick up food resembled a large horseshoe as it stretched from Grove Street to First North Street and down Jackson Street to the front of the church, where church members handed out gallon jugs of milk, bags of apples and other food as people arrived.

Church member Dorothy Holmes said the church usually distributes food provided by the Mississippi Food Network once a month, “And then, like now, they have food over there in Jackson and they give it to us to distribute.

“Now, it’s more than once a month because we have things coming in the middle of the month,” Holmes said as she assembled and taped boxes to be filled with food.

“This time we’ve done it twice a month; sometimes we do it two or three times, depending on what’s over at Mississippi Food Network,” said church member Rosie Wince. “We do once a month for sure — the fourth Saturday of every month. In between, whatever we have, we distribute.”

When the Mississippi Food Network has food for distribution, Holmes said, a representative calls church deacon Fred Davis, who contacts a church member to go pick up the food and bring it to the church.

“And a distribution like this is open to anyone who hears about it; they can just come over and pick up,” Holmes said.