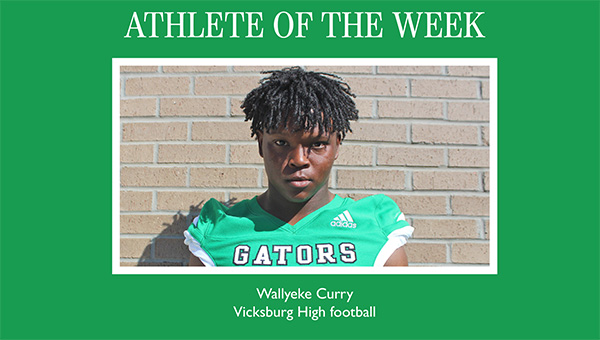 Wallyeke Curry has been a big part of a dominant defense for Vicksburg High’s football team this season.

Now, he’s also The Vicksburg Post’s Athlete of the Week.

Curry received 238 of 687 votes cast in an online poll by The Post’s readers to become the latest winner of the award.
In a matchup of football players from Warren County’s four high schools, Warren Central running back Trey Hall finished second in the voting with 189 votes, Porter’s Chapel Academy’s Taylor LaBarre was third with 169, and St. Aloysius’ Jax Oglesby fourth with 91.

Curry, a senior linebacker, had 10 tackles, two sacks and two tackles for loss in the Gators’ 30-7 rout of previously undefeated Callaway on Oct. 6.

Curry has 53 tackles this season, and is second on the team with five sacks. He also has eight tackles for loss while helping Vicksburg to a 5-0 record in MHSAA Region 2-5A. The Gators’ defense has allowed an average of 7.3 points per game heading into Friday’s road contest at Ridgeland.

Congratulations to Wallyeke and the other nominees, and thank you to our readers for voting.

The nominees for the Athlete of the Week award are announced each Sunday, and voting is open until midnight Tuesday. Links to the poll will be posted on our Facebook and Twitter pages, as well as vicksburgpost.com.