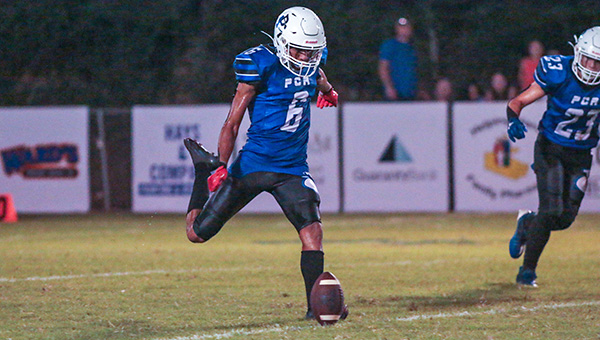 The biggest game of Porter’s Chapel Academy’s football season, the one that will ultimately set its path through the MAIS Class 2A playoffs, is next week.

This one, though, is also pretty darn important.

The Eagles will host Christian Collegiate Academy Friday at 7 p.m. in what could be a pivotal match-up in the Class 2A playoff race.

Although PCA (4-3) can still win the District 3-2A championship and earn a top-three seed by beating Tallulah Academy in next week’s regular-season finale, a win over Christian Collegiate (5-2) might be the difference in hosting a first-round game or not should Plan A fail.

“It’s very important for a lot of reasons — power points, seeding, rebounding, and then beating a very quality opponent that’s going to give people a lot of fits in the playoffs,” PCA coach Blake Purvis said.

Christian Collegiate is currently sixth in the MAIS power points rankings and PCA is seventh. The three district champions in Class 2A receive the top three seeds in the 12-team postseason bracket, and the other nine go to wild cards that are seeded by their power points averages.

The Nos. 5-8 seeds host first-round games, while Nos. 9-12 go on the road. Losing Friday might not push Porter’s Chapel as low as the No. 9 seed, but a win would almost certainly keep it somewhere between 6 and 8 and guarantee a home playoff game no matter what happens next week against Tallulah Academy.

For Purvis, as big a concern of where the Eagles will start the playoffs is how they’ll be playing when they get there. PCA has had a winning, but uneven season.

They’ve lost two of their last three games following a 3-1 start, and need to get back on track as the stakes rise each week. The Eagles were trounced by Prentiss Christian last week, 42-6, in what Purvis called the team’s worst game of the season.

“We’ve got to be prepared and execute better from here on out,” Purvis said. “You could almost say our playoffs start this week, except for if we lose we’re not out of it. What we’re going to face from here on out doesn’t get any easier.”

Beating Christian Collegiate, however, will not be easy. The Bulldogs are averaging 44.9 points per game, and have scored at least 30 in all but one outing. Their two losses, to Class 2A power Newton Academy and Wilkinson County Christian, were by a combined eight points.

Purvis said Christian Collegiate has speed to spare that will be enhanced by playing at PCA. Christian Collegiate plays its home games on a 40-by-80 yard 8-man field, rather than the larger 50-by-100 yard field most teams — including Porter’s Chapel — use. Having more space to work with could make the Bulldogs even more explosive.

“They might be the fastest team I’ve seen in 8-man in the two years we’ve been in it,” Purvis said. “They’re so fast that they’re hard to keep contained inside. And they play on the smaller field at home. You play on this (larger field) and it’s going to be even harder to contain them.”