Gators go to Ridgeland with chance to clinch playoff berth 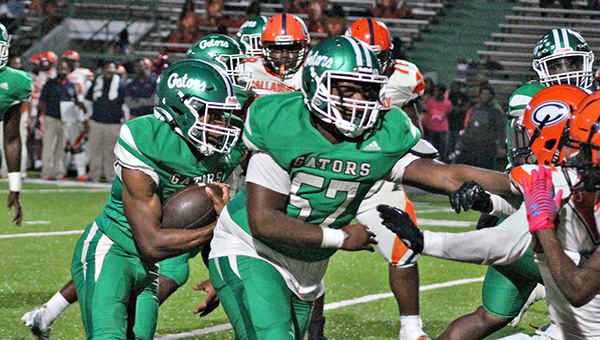 Vicksburg High running back Alex Jefferson (4) runs behind the block of lineman Dareh Minor (57) during last week's game against Callaway. The Gators play at Ridgeland this Friday night, and can clinch a playoff berth with a victory. (Ernest Bowker/The Vicksburg Post)

Knocking off another playoff contender.

The Vicksburg Gators can’t check every box this week, but they sure can check a lot of them.

The Gators (5-2, 5-0 MHSAA Region 2-5A) can clinch a playoff berth — among other goals — by winning on the road Friday night at Ridgeland. Even though bigger games are ahead, for the moment this as big as it gets.

“To go to Ridgeland and get a win would be big for us and big for the program. It’s big because it’s the next one, and it will put us in a really good space as far as the playoff seeding is concerned and getting into the playoffs for the third year in a row,” Vicksburg coach Todd McDaniel said. “Every win from this point forward is going to be a big one. You hope you can get hot and continue to reel them off.”

Vicksburg High has not had back-to-back winning seasons since 2007-08, and can end that drought by winning Friday. It would also clinch a playoff spot and stay at the top of the Region 2-5A standings.

Vicksburg’s last two regular-season games are against fellow playoff contenders Neshoba Central and Holmes County Central, with a bye week sandwiched in between. “It feels like the playoffs already because of the way these teams are lined up on our schedule,” McDaniel said. “You can’t take a week off. There are no more gimmes. You have to go out and fight for every yard and every inch.”

Ridgeland (5-2, 2-2) was ranked in the top five in Class 5A in the Mississippi Associated Press Class poll after starting 4-0, but has lost two of its last three games.

The losses, by 15 points each to region rivals Callaway and Neshoba Central, have left the Titans fighting for their playoff lives. They’re currently in fifth place in a fight for four playoff berths from Region 2-5A.

Even though Ridgeland is slumping, McDaniel said it would be a mistake to take them lightly.

“We’ll still have our work cut out for us this week,” McDaniel said. “You never know what goes on inside a fieldhouse. They lost their last two, but you don’t know what kind of injuries they’ve had.”

Vicksburg, meanwhile, is entering this week on a five-game winning streak. The Gators easily handled Callaway 30-7 last week and seem to be trending in the right direction.

Vicksburg has allowed only 27 points in five region games, and 57 in seven games total. It has registered 20 sacks and a dozen takeaways this season.

“You can’t say enough about (defensive coordinator Chris) Lacey and those guys over there. They give you an opportunity to win the football game,” McDaniel said. “That’s part of our overall strategy. Everybody wants to play good defense, but everybody does not play good defense. If those guys continue to go out and play that way, we can win any game.”

The offense also picked up the pace against Callaway, with 180 rushing yards. It could have been more, but most of the second half was consumed by two long scoring drives that put the game away.

Alex Jefferson had 50 yards and three touchdowns, and Malik Montgomery had 84 yards and one TD.

The sustained drives are what McDaniel wants out of his offense. Combined with the staunch defense, he believes it’s a winning formula that will propel the Gators deep into the Class 5A playoffs next month.

“When you see 14-, 15-play drives without a mistake or loss of yardage, that means you’re going in the right direction. It means you might be turning the corner, and this is the perfect time to turn the corner,” McDaniel said. “We only have three more regular season games, three district games, three tough teams, but we’re going to start one at a time. We want to go 1-0 this week.”