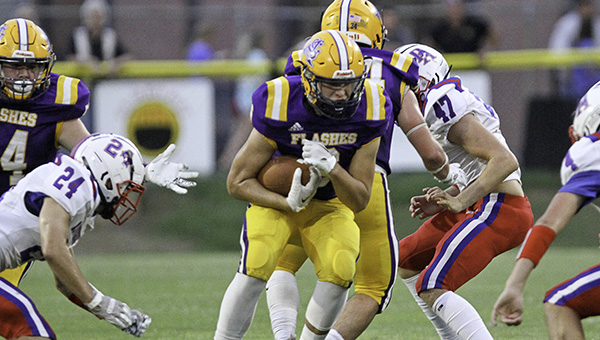 St. Aloysius running back Thompson Fortenberry carries the football earlier this season. Fortenberry and the Flashes will go on the road Friday night to play Greenville-St. Joe. (Paul Ingram/For The Vicksburg Post)

A few weeks ago, the St. Aloysius Flashes fired themselves up to face their blood rival Cathedral.

Now it’s time for the “other” Catholic school kin on their schedule.

The Flashes (1-7) host Greenville-St. Joe (6-1) on Friday. It’s a long-running series that started in 1952, between two schools with a lot in common, yet also a game that has rarely had the same pizzazz as the annual meeting with Cathedral or even the now-dormant series with Madison-St. Joe.

Bubba Nettles, who is in his second season as St. Al’s head coach and third overall at the school, couldn’t quite put his finger on why.

“St. Aloysius and Cathedral have played way more, and so I feel like that one is way more of a rival than Greenville-St. Joe. But it is a Catholic school rivalry, no doubt about it,” Nettles said.

The recent trajectory of the two programs might have something to do with the current apathy toward the rivalry. The two schools left the MHSAA together to join the MAIS in 2015 and Greenville-St. Joe immediately became a powerhouse while St. Al has struggled.

St. Joe has won three state championships as an MAIS member and is a contender again this year. St. Al has had one winning season and will not make it two in 2022.

The Flashes have lost seven games in a row since beating Park Place in the opener. They won’t qualify for the MAIS Class 4A playoffs and will conclude the season next week against another state power Tri County.

Nettles currently has five starting linebackers or defensive backs that are freshmen or sophomores. The inexperience in the secondary, caused by a season-long stream of injuries, has allowed talented opponents to shred the Flashes through the air.

Greenville-St. Joe quarterbacks C.J. Moore and Victor Baker have combined to throw for 1,343 yards and 16 touchdowns in seven games, so Nettles said it could be another long night for his defense.

“We’ve been able to defend the run. The injuries that we took happened to be on the third level of our defense. That’s where we’re having to start all of these young kids, these freshmen,” Nettles said. “Greenville-St. Joe has some tremendous athletes at wide receiver and their quarterback is very athletic. He has the ability to extend the play for his receivers to get open. We have to make sure we can keep him contained in the pocket.”

Although it hasn’t been an easy season, Nettles said he’s trying to keep things as light and fun for the Flashes as possible. They ran several trick plays last week and lined up senior offensive lineman Jax Oglesby at tailback for a half-dozen plays.

“We’re trying to do everything we can to keep everything fun,” Nettles said. “We still want to play fundamentally sound football. And at the same time if we can execute a trick play here or there, or come out with a formation where one of our senior offensive linemen has an opportunity to score a touchdown running the football, we’re going to do that.”