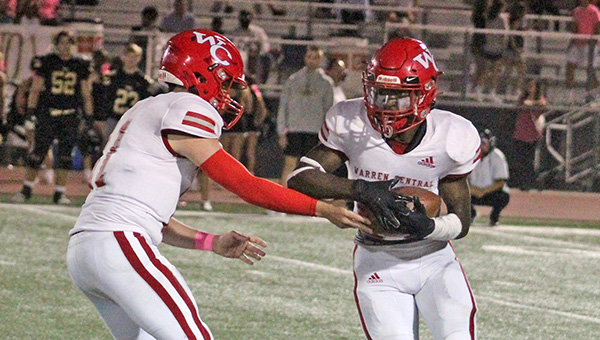 The top four teams in the league’s standings play the four in the bottom half on Friday night. It’s a golden opportunity for the contenders — including Warren Central — to put some distance on the also-rans and take a big step toward clinching playoff berths.

“As it goes, you can see some that fall off,” Warren Central coach Josh Morgan said. “Right now there’s two teams in our district that don’t have a win and the rest are right there in it. This is a big week as far as separation. You can slip up at any point in time. It’s important that we keep winning and keep being on point.”

The four teams in the bottom half of the standings all have two or three losses, and will have a hard time rallying to reach the playoffs with another.

The four in the top half, meanwhile, all have two or three wins and could exit Friday with a two-game lead in the playoff race with three to play.

Morgan knows well how that sort of desperation can bring the best out of a struggling team. Last year, Warren Central lost its first three region games before beating Pearl 3-0. That victory sparked a five-game winning streak that carried the Vikings to the second round of the Class 6A playoffs.

“For them to stay alive, they’ve got to beat us. We have to understand that and be at our best. It’s another big game,” Morgan said. “They’re still the Pearl Pirates. They’re going to play you as tough as they can. They’re going to be well-coached. They’re a physical football team and they’re going to make you beat them.”

Warren Central has been finding ways to beat teams all season long. Four of its six games have not been decided until the final minute of regulation or in overtime.

The Vikings have not been pretty in getting their record to 5-1, but they have been getting it done.

“I’m glad to see us winning. I know we can play better. I know there’s a lot of coachable moments where we can get better, and we’re trying to get better and I think we’re getting better,” Morgan said. “But I think it would also be naive on our part to not understand where we’ve got to get and the type of ball we’ve got to play consistently for the month of November if we’re fortunate enough to get deep into that. We’re always chasing to be perfect and I think that’s a good way to be.”

While still chasing perfection, Morgan was happy with last week’s 35-28 road victory over Northwest Rankin.
The Vikings rushed for 212 yards as a team. They showed some explosiveness with three touchdowns of 30 yards or longer, yet also an ability to grind out first downs and control the clock when needed.

“I think offensively we played our best game and we needed it. We kept control and we were able to win,” Morgan said. “Sometimes a really good ball control offense is the best defense. We’ve won in different fashions, and we’re going to continue to improve on that identity.”

Even though, on paper, it appears to be a showdown between the haves and have-nots, Morgan said in Region 3-6A there is no such thing. Through the first three weeks of the region schedule, five of the 12 games have been decided by seven points or less. Oak Grove has had two games decided by one point.

“There are very good football teams and I think there’s a lot of parity. Everybody is still alive as we showed last year,” Morgan said. “We have to play our best, and be prepared to be at our best mentally, physically, and have our best game every week. I know our guys and our coaching staff knows that, and that’s what it takes. You have to bring it every week.”